Irrfan Khan’s Hindi Medium which was released on May 19 has collected Rs 19.01 cr within five days of its release. The film, which released alongside Arjun Kapoor and Shraddha Kapoor’s Half Girlfriend, has managed a steady growth in its weekdays as well. Trade analyst Taran Adarsh tweeted that the film had a “solid Monday” as it collected Rs 3.15 cr,  more than Rs 2.81 crore that it minted on its opening day.

Made on a small budget of Rs 22 crore, Hindi Medium is going strong at the Box Office. As compared to an established director like Mohit Suri, this Irrfan Khan starrer is a directorial debut of Saket Chaudhary.

Not only in terms of Box Office collections, but the film is also growing well on the word of mouth. The film’s story revolves around a couple who want to make their daughter study in one of Delhi’s top school. Hindi Medium has a strong message for parents who have suffered the traumatic jitters of preparing to get their child admitted into ‘elite’ schools. 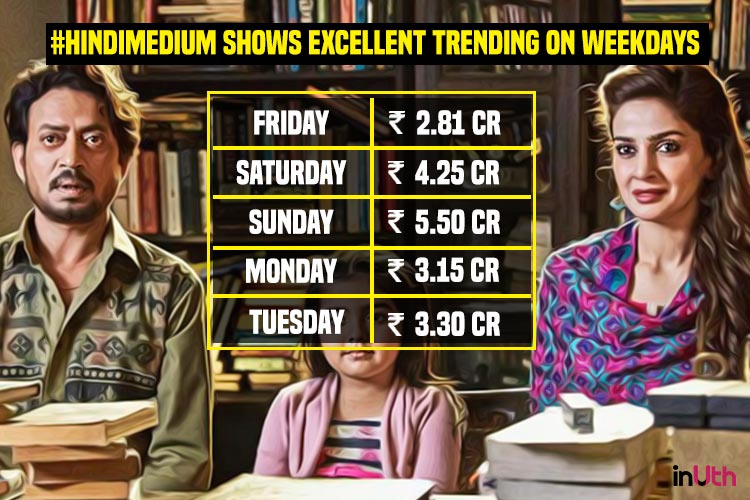 Apart from Irrfan Khan, the film also marks the Bollywood debut of Pakistani actress Saba Qamar. Check out the exact figures shared by Taran Adarsh on his Twitter page:

Also Read: Half Girlfriend Box Office collections are better than Hindi Medium, but the Irrfan Khan film is the real gainer

Talking about the number of screens, Hindi Medium released in over 1126 screens. So as compared to Half Girlfriend, which has been released on 2500 screens, this Irrfan Khan starrer is getting good business at the Box Office so far.