Akshay Kumar is now 50, yet still has the gummy smile of a 13-year-old caught with his hands in his father’s wallet. And in R Balki’s ‘Pad Man’ that brittle vulnerability serves him well as Laxmi, a young man (yes, we are still doing that) who is so much in love with his wife that he is ready to defy conventions. Yet, despite his apparent “commitment” to the role, this film sidesteps uncomfortable realities in favor of soothing whimsy and preordained uplift.

Since it’s based on the real-life struggles of female hygiene evangelist, Arunachalam Muruganantham, the audience is most likely to be moved by the man and his vision. But that doesn’t take away from the fact that R Balki’s retelling is patchy, at its best, and overtly simplistic, at its worst. It also aids Akshay Kumar in his mission to establish himself as the public service commission messiah of India. 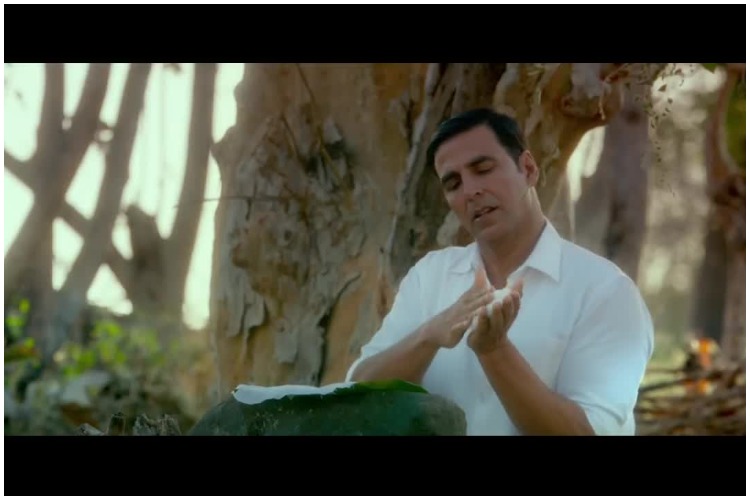 In a predictable move, Balki chooses to set a Tamil man’s story in a generic North Indian village where men perform suryanamaskar at the ghats while women happily soap their husband’s banyan. Balki, like all his Bollywood predecessors probably wanted to make his film more universal and that in Bollywood language is “north India”.

Balki wants us to know that it’s a village set on its way and the simpleton Laxmi is a loose canon. Which is why you are not allowed to snort in disbelief when you see him express surprise when his newly-wedded wife, Gayatri (Radhika Apte) is send away to a secluded room during those days of the month.

Picture this: during a family meal, when Gayatri starts chumming, she excuses herself and moves to the secluded room. Laxmi is completely stumped and starts questioning the practice immediately.

This man lives with two grown sisters for years for chrissake! What did he think his sisters were doing when they were packed off to the chumming room during those months of the year? Organising a pajama party ?

Thereon, he addresses all the superstitions and malpractices associated with a woman’s menstrual cycle with the same amount of culture shock that you expect from an urban person. It’s almost as if Laxmi is doing this for our benefit. It’s almost as if Laxmi has been suddenly transplanted in this village without any context or even a basic understanding of its ethos.

Meanwhile, people around him are cardboard cutouts displaying different shades of geniality. From the shocked neighbour (whose teenage daughter is gifted with a handmade pad by Laxmi in the middle of the night) to the friendly butcher (who lends Laxmi with all the help and a shoulder to cry on whenever he needs it), no one poses any threat of derailing the uni-dimensional narrative.

Arunanchalam may have time and again stated that he started this endeavour to simply impress his wife but Balki feels that it is necessary to burden his protagonist with a bigger sense of purpose. Every frame, every dialogue, every back-handed joke is designed to project Laxmi like a messiah and that is the greatest disservice that could have been done to the film.

Laxmi, for all his steely determination, is a bore. His unwavering sense of purpose is almost comic-bookish. He is like Tom from Tom and Jerry, who keeps pursuing his nemesis even after his body is sawed into pieces.

Gayathri is the simpering stereotype who needs to be saved and that is her only function in Laxmi’s life. Even when Balki tries to convey the frustrations of her character, like in a crucial telephone scene where Laxmi breaks the news of him winning a major award for his invention and she is angry because he doesn’t even ask how she is. The scene ends up being all about the magnanimity of Laxmi’s vision.

As Laxmi’s most ardent supporter, Sonam Kapoor yet again manages to the achieve the impossible feat of changing into 20 designer outfits in a 10-minute role. Most of her screen-time is spent in gaping at Kumar and calling him “buddhu kahin ka” fondly.

There’s nothing wrong with choosing idealism over the challenging. Maybe, that’s the a reason why every edge is buffed smooth in Pad Man. Maybe, Balki wanted  to create a fable.

However, Balki’s Pad Man is also tainted by a very vested purpose. That of feeding the legend of Akshay Kumar.