Sumeet Vyas’ cheeky smile, his confused demeanour and somewhat irritating questions were probably the best part about web-series Permanent Roomates. When TVF launched the show, little would they have thought that it would be a huge hit garnering over 40,00,000 views in a matter of days. But the web-series about a couple on a roller-coaster ride, from moving in together to getting married and almost having a baby, showed millennial relationships in the best way possible. It broke through the normal cliches surrounding the most misunderstood generation and showed millennials do a lot in their lives other than smoking, watching porn and having sex. Apart from doing all this, the series put the spotlight on Sumeet Vyas- the actor who previously worked in movies like English Vinglish. 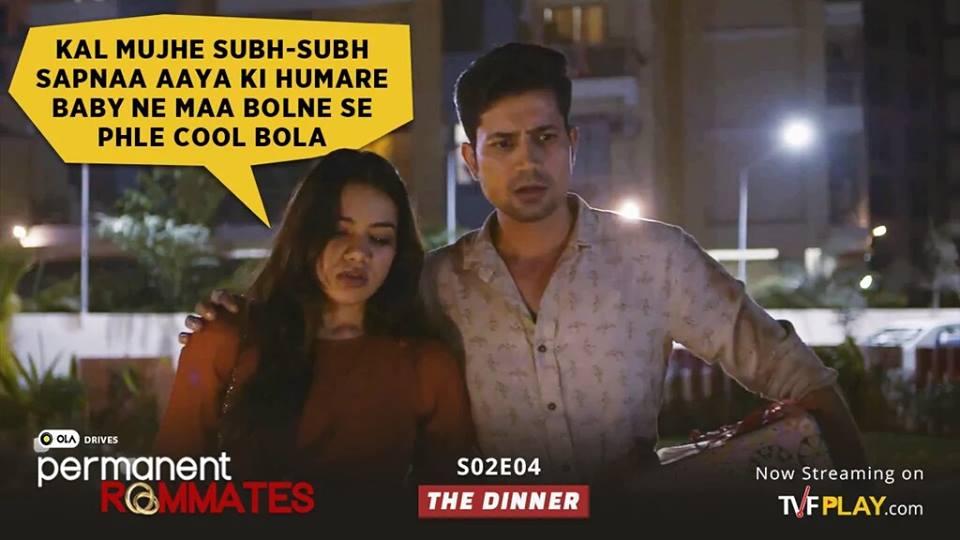 A still from Permanent Roommates

How talented Sumeet Vyas is, is not hidden from anyone anymore. But what’s more important than the fact that he can be rightfully given credit for giving the most misunderstood generation a fair representation in pop culture. Most of the characters which Sumeet has essayed in his acting career revolve around the ‘lost’ nature of the youth. The best part is, Sumeet’s characters are unapologetic about it. Have a look:

In Permanent Roommates when Mikesh (Sumeet Vyas) turned up at the door of his girlfriend Tanya (Nidhi Singh), he came across as the foolish man who doesn’t look beyond marriage. His overconfidence and James Bond-like introductions which he kept giving, was enough to make one realise how stupid he was. Mikesh’s one-liners and jokes were as pathetic as they could get. Despite so many flaws in him, it was Mikesh’s love for Tanya which made viewers root for him. In the second season of this much-loved show, Mikesh impressed everyone when he said he’d marry Tanya when he’s ready and not bow down to pressure because she’s pregnant. Mikesh hit the ball out of the park when he explained to his father-in-law the definition of a modern man. He said that unlike the earlier notions, about men not crying it is important for them to shed tears and be sensitive these days. What Mikesh’s character showed was what it’s like being a millennial and not conforming to the cliches.

From being a person who gets onto your nerves to be the man you’d like to hug, Mikesh came a long way in Permanent Roommates. Can we also get this Mickey hug, please?

After playing the cutesy lover in Permanent Roommates, Sumeet took on the role of a dejected man in Tripling- another TVF show which traced the life of three siblings living separate lives who went on a road trip. As the elder brother Chandan, who had a failed marriage and returned to his folks, Sumeet showcased what it’s like to always live up to the expectations of people. After meeting his siblings after a long time, Chandan realises how much he had missed. In one of the episodes of Tripling, a simple conversation with siblings in a desert at night explained why it’s important to not lose touch with family. In yet another episode, when sister Chanchal accused Chandan of not caring enough, one could see the guilt in his expressions. Chandan tapped on the biggest millennial problem of feeling lost and thinking about all the decisions of the past on many occasions. Have a look at the trailer of this show:

A 40-minute-long short film titled Born Free starring Mukti Mohan and Sumeet Vyas managed to explain what even feature films don’t. As a corporate slave Samarth, Sumeet talked about the regret which comes with not following your dreams. It took Samarth a conversation over a beer with a travel-blogger, who’s his polar opposite, to understand his soul was born free and needed to be that way. It won’t be wrong to say that Born Free was the cliched story one would imagine about a troubled millennial stuck in a job he hates. Everything about the film was predictable and that is not totally bad. The niceness of Samarth was enough to keep one hooked and ponder over the decision in life which helped them reach there.

When a young couple faces an unplanned pregnancy, things are bound to be a rocky. This subject is dealt in the upcoming release Ribbon, directed by Rakhee Sandilya and starring Kalki Koechlin and Sumeet Vyas in the lead.  Just like all the characters he has played, Sumeet’s Karan also comes across as someone who has mastered the art of keeping calm in crazy situations. He handles Shayana’s (Kalki) losing temperament, understands he’s in for some deep trouble but yet stays put. Karan has lessons for all and not panicking definitely tops the list.

In a world where every other celebrity and actor looks like a model of perfection, it is soothing and reassuring to see someone like Sumeet Vyas. It is reassuring to see a regular guy enact our daily struggles and dilemmas so effortlessly and making us believe that we are not alone in making wrong weird choices, we are not alone in not having our lives sorted. Thanks Vyas for being there. Keep up the good work.