Interestingly, the invitations were limited to those, who had already been openly championing the CAA on their personal social media. The likes of Anubhav Sinha, Swara Bhasker, Anurag Kashyap, who have openly been questioning the constitutionality of the CAA weren’t invited to ‘clear the air’.

According to this Huffpost article, all Bollywood actors were sent the invite that read as follows – “We strongly believe in a healthy discussion around all the possible dimensions of the issue. Your inputs will enlighten the discussion. It will be followed by a scrumptious dinner. Please come over. See you.” An unnamed source was quoted as saying – “expect nonsense CAA supporting rubbish tweets from Bollywood stars day after onwards.” The article contended that this was a last-minute maneuver by the government to garner support for the CAA from Bollywood, after the legislation has been inspiring nationwide protests. 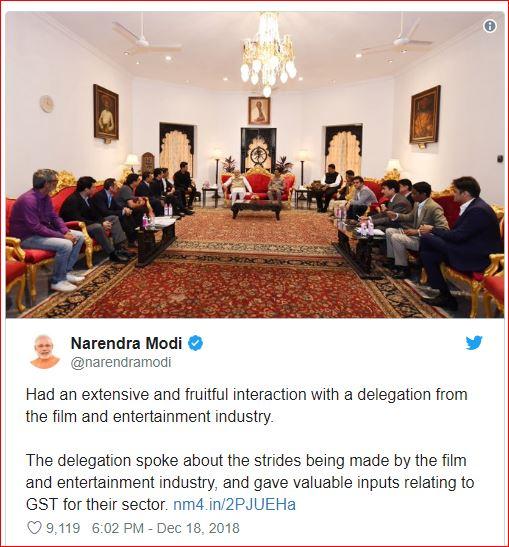 While it was reported that the biggest names were being reached out to, some like Farhan Akhtar announced that weren’t going to be able to make it because of prior commitments. Akhtar was one of the star attractions of Mumbai’s anti-CAA protests at the August Kranti Maidan on December 19.

This was being touted as another exhibition of BJP’s influence on Bollywood, especially after the Bollywood selfie from last year. The 2019 picture had the honourable Prime Minister with Bollywood stars like Ranbir Kapoor, Ranveer Singh, Vicky Kaushal, Rajkummar Rao, Ayushmann Khurrana, Karan Johar, Ekta Kapoor, Alia Bhatt & Bhumi Pednekar. However, this meeting wasn’t close to being as star-studded, considering how it wasn’t attended by a single A-lister.

Speaking to the Indian Express after the meeting, Ranvir Shorey said that the meeting was held to ‘clear the air around CAA’ and that he was happy with the discussion. “The fact how it’s not about taking the citizenship away but granting it to refugees from neighbouring Islamic countries. The government feels there is a lot of misinterpretation regarding the CAA, because of which there are protests still going on,” Shorey was quoted.