It’s a rainy day and two young people decide to know each other a little well. Arjun Anand tries to impress Kavya, a well-read, smart, independent woman living with her father in Mumbai. She tells him that for each time he would tell her something that she finds impressive about him, she would put out a coffee bean from the bowl. It was a brilliant first date idea and the couple there looked damn relatable. This is a scene featuring actors Barun Sobti and Shahana Goswami from their recent release — Tu Hai Mera Sunday. With Shahana, who says she is not offered many interesting roles, this was probably her second full-fledged commercial film after Rock On or Rock On 2 (if you count that). But, for Barun, it was his first celluloid outing gone right. The man is more popularly known as Arnav Singh Raizada from Star Plus’ famous TV show — Iss Pyar Ko Kya Naam Doon. He had also done a short romantic series for Hostar, titled Tanhaiyan opposite Surbhi Jyoti. And has also done movies like Main Aur Mr. Riight, and 22 Yards among others. However, seeing him as Arjun Anand, a middle class, self-made guy fighting his own battles was a pleasant surprise. So, how have we seen Barun so far?

Trying to do his best in an over-dramatised daily soap.
Flaunting his well-toned physique as Haider in Tanhaiyan.
Trying to make audience love his bad boy (for a cause) image in another daily soap which is now going off air.

None of these appearances for long seven years could really establish Barun as an actor. At best he could be called a male eye-candy. Yes, the stardom followed and so did other TV shows. But, the roles that he did were of the same kind. A dominating hero, who could easily be the man of any girl’s dreams. He was hot, charming and every inch a quintessential stud. And yet, when we see Arjun from Tu Hai Mera Sunday, we are convinced that the actor is much more than his small-screen persona. He has a distinct body language that helps him convey his emotions – a quality that his much popular TV shows could never managed to magnify. So, how are we seeing Barun now?

Acting like never before. Complimenting a brilliant actor like Shahana Goswami.
Playing a character which is probably the freshest character in Bollywood this year.
Trying to live an ordinary, slice of life love story. 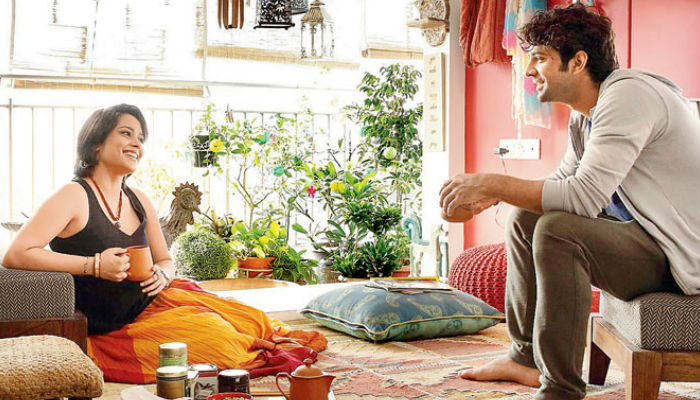 Even in a multi-starrer film, Barun stands out. Here’s why:

First, he has done a brilliant job with acting and second, for the first time, we aren’t seeing him wear fancy clothes or carrying the heft of an imaginary rich man. It’s easy to fall for a simple Arjun Anand as compared to a rigid Arnav, and that’s probably something that TV doesn’t understand. The men on small screen are either too submissive and hardly have any say in the story, or they are over the top characters that do not exist in real life. It’s good to see Barun coming out of that shackle of stereotyping.

is a job done commendably right!