Mahira Khan earned a lot of accolades when she shared the screen space with Shah Rukh Khan in his latest gangster drama Raees. The Rahul Dholakia directorial turned out to be an average grosser. Meanwhile, Saba Qamar stole the show in Irrfan Khan’s Hindi Medium that has turned out to be a hit at the Box Office. Shockingly, they aren’t the most popular stars on Google in their country. They have been outsmarted by three Indian actresses. Do you know who are they?

Katrina Kaif, Deepika Padukone and Priyanka Chopra are the most searched actresses by Pakistanis on Google. The data on Google Trends from January 1 till date suggests. In fact, Katrina, who turns 34 on July 16, is followed by local star Mahira. Priyanka, who celebrates her birthday on July 18 is ahead of Deepika and Saba Qamar.

Regionwise, it is a direct clash between Katrina and Mahira in all the regions of Pakistan. In Sindh, the Bol actress registered 16 searches as compared to the Tiger Zinda Hai’s 34 results. An interesting thing to note is that Pakistanis sometimes confuse Katrina with Kareena Kapoor, as the latter also features in 5 searches. Nevertheless, the UK-born actress is extremely popular in cities like Mardan, Islamabad, Quetta, Abbottabad and Karachi.

Also read: Fawad Khan is NOT the most popular actor in Pakistan. Google Trends says these three Indian actors are

Deepika Padukone and Priyanka Chopra are often compared in terms of stardom. Both have made their foray into Hollywood and are pursuing an acting career in the West. Google Trends suggest that the Bajirao Mastani co-actors enjoy equal popularity in Pakistan. The dimpled actress is extremely popular in Multan, Gujranwala, Karachi, Rawalpindi and Faisalabad. Just have a look. 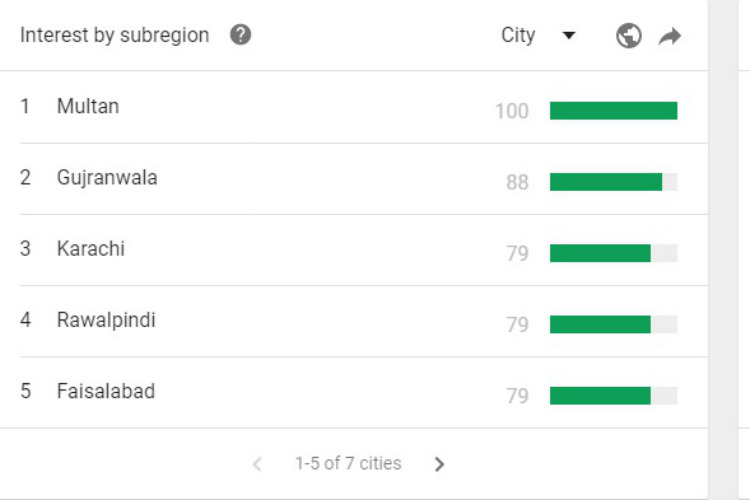 Deepika Padukone is popular among Google users in Pakistan

Have a look at Priyanka’s fan following among Google users in the neighbouring country. 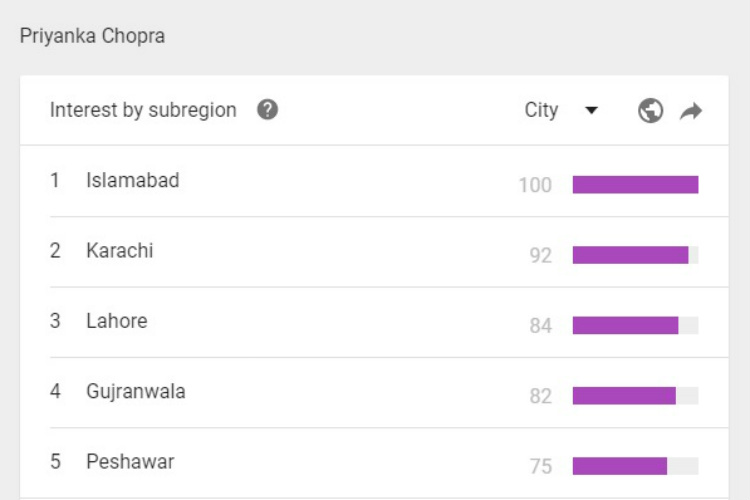 Priyanka Chopra lags behind Katrina Kaif on Google in Pakistan

Also read: Is Priyanka Chopra more popular than Deepika Padukone on Facebook in US? The answer will surprise you

Need to pull up socks

Saba Qamar is a prominent Pakistani actress having earned immense critical acclaim through her performances in films like Aina, Manto, Lahore Se Aagey and others. She will be portraying the role of slain model Qandeel Baloch in her upcoming film Baaghi. But as far as her popularity on Google is concerned she is far behind the other four actresses. 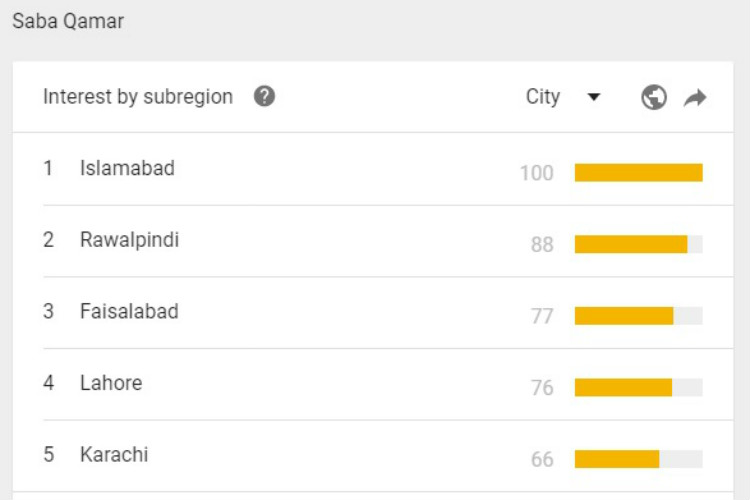 Who is your favourite actress?