Good Newwz is an empty shell of a Bollywood film (hell-bent on ‘entertaining the masses’), that tries to inject an Ayushmann Khurrana-type script into the realm of Akshay Kumar & Diljit Dosanjh. So transparent are the film’s intentions that one can practically hear Karan Johar scream “Ayushmann Khurrana’s woke-liberal type audience + Akshay Kumar’s Housefull audience = Rs 200 Crore”. For something pretending to be ‘issue-based’ (IVF), Good Newwz is completely devoid of a point-of-view.

The film’s brazen commercial interests ensure that it all kicks off with a Volkswagen commercial. Varun Batra (Akshay Kumar), a car salesman, is trying seal a sale with a loaded customer. The customer’s son throws a fit, which results in the sale falling through, in turn making Varun tell his colleagues how much he ‘hates kids’, reminiscent of Kumar from Heyy Babyy. Varun is a man’s man, who can’t be bothered to remember his wedding anniversary or his wife’s birthday, and he turns to his friends when asked what day it is. Kumar plays Varun like someone straight out of those *men will be men* ads, who pretend to be busy at work when he’s actually drinking at a bar, and constantly grumbles to his wife about how much she over-exerts him in the bedroom. In short, he’s that bechara man from those Whatsapp jokes.

Playing the the role of Deepti, Kareena Kapoor Khan does her best Monica (trying-to-get-pregnant) Geller impression. The first half hour of the film is spent by Deepti educating Varun about ovulation cycles, feigning ignorance about how men fake an orgasm, and attending a cringe family-function where several ladies advise her about conception. At one point, Deepti is even heard saying how visiting her in-laws without a child feels like Virat Kohli returning home without a trophy in his hand.

What are her views on parenting? What are her anxieties as someone whose biological clock is ticking? Does she begrudge her husband, whose career will go on irrespective of a child coming into the picture? None of these questions are probed because Jyoti Kapoor & Rishabh Sharma’s screenplay is too content with its fart jokes. 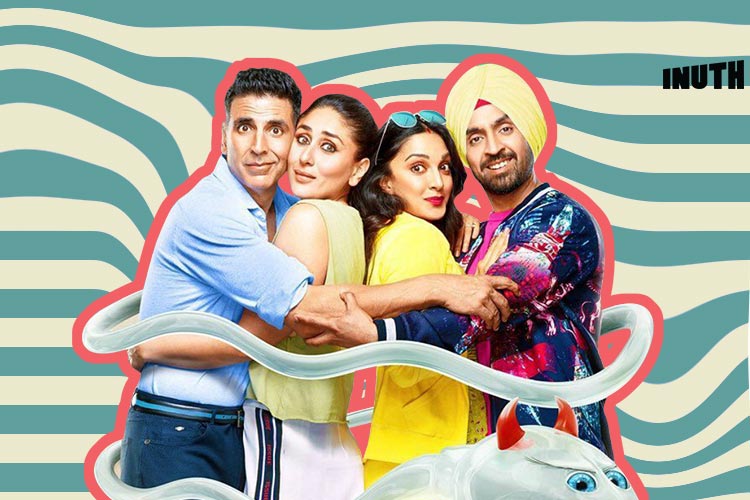 It’s incredible how a two-hour film is based on a conceit as thin as a ‘sperm mix-up’, and how shamelessly Jyoti Kapoor’s story pits apna khoon vs adoption. The writing and the characters are really that shallow, that when they endorse IVF (In Vitro Fertilisation) simply because apna khoon, no one’s surprised. It endorses Diljeet Dosanjh doing his ‘buffoon-from-Punjab’ routine for the umpteenth time, while Kiara Advani is entrusted to wear clothes matching to her husband and give him the occasional hi-five to come across as a ‘cool couple’. Good Newwz‘s persistent efforts to appear ‘hip, urbane, cool’ (characters drink beer in every other scene) looks embarrassing to say the least.

Walking out of Good Newwz, one can’t help but think about how afraid stars like Akshay Kumar and Salman Khan really are. They’re so afraid of losing their fame, that they regurgitate the same kind of films, to appease the same fan-base. And they’ll continue doing this till an asteroid hits the planet. It’s appalling how such lazy films are labelled ‘fun’. Good Newwz is the kind of film where a hesitant pregnant woman is manipulated into keeping her baby with the help of an ultrasound, where the Doctor points out the heart of the foetus.

Raj Mehta’s Good Newwz is so second-rate in every respect, that it inspires questions like – how did this get bankrolled? Is Karan Johar willing to trade Dharma Productions’ prestige for a few extra bucks? Can Akshay Kumar stop deifying the lustful man… only for a few extra laughs?