Amitabh Bachchan reprises his role as godfather Subhash Nagre in Ram Gopal Varma’s Sarkar 3, releasing May 12. The film is the third instalment of the popular thriller franchise after the earlier versions released in 2005 and 2008 received critical acclaim. The trailer of the film, which was unveiled a month ago, promises the film to be more intense and full of suspense.

Ram Gopal Varma has already been in the news for the past six months, thanks to his offensive tweets on Sunny Leone, Mammootty and the very recent Tiger Shroff. Ironically, Tiger’s father Jackie Shroff essays the negative role in Sarkar 3. Well, it will be seen whether the filmmaker is able to wipe off his nasty tweets from the memories of viewers once the film hits the theatres.

Here are 5 key highlights from one of the most awaited films of this year.

Amitabh Bachchan: If you thought Subhash Nagre is vulnerable after the death of his two sons Vishnu and Shankar, you are absolutely wrong. In spite of being surrounded by enemies from all sides, the ageing godfather instils the same fear among his rivals. And the titular role has been drawn only for Amitabh Bachchan.

The trailers have shown him in a much more angry-avatar than the previous versions; Ram Gopal Varma deserves applause for this. Right from his attire to the dialogues, Big B seems to have lived the character to the fullest. 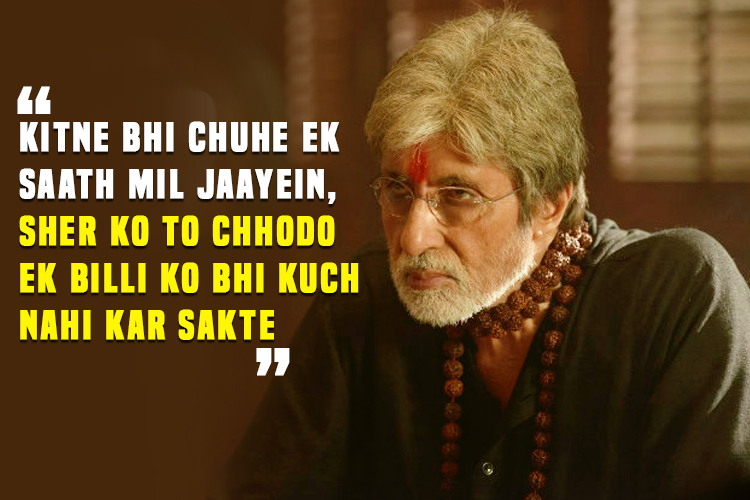 Amitabh Bachchan in a still from Sarkar 3.

The killer combo: Sarkar faces the toughest challenges from two people, Michael Vallya (Jackie Shroff) and Govind (Manoj Bajpayee). The duo has taken up the mantle to defeat Subhash Nagre in every possible manner. Both the stars need no introduction in terms of acting prowess. While Vallya is a rich conspirator who will use all the machinery at his disposal to destroy Sarkar, Govind is a principled rebel who is more focused towards decimating Nagre’s ideology (soch). It is really heartening to see Jaggu Dada at his stylish best as he takes on the unchallenged godfather.

Take a look at Bajpayee’s look from the political thriller.

Intriguing plot: The trailer of the film gives a sneak peek into the third instalment of RGV’s critically acclaimed Sarkar franchise. Subhash Nagre’s hegemony in Mumbai is challenged by ambitious power-brokers from all the sides. The godfather has a trusted aide Gokul (Ronit Roy) by his side, who will shoot anyone on the orders given by the former. However, the trusted lieutenant shares a frosty relationship with Sarkar’s errant grandson Chiku aka Shivaji (Amit Sadh), who often has differences with his grand-dad. Shivaji is dating a girl Annu Karkare (Yami Gautam) whose father was allegedly killed by Sarkar’s henchmen.

Surprise elements: Amit Sadh gained accolades for his roles in Kai Po Che!, Sultan, Akira and more recently RunningShaadi.com. But Sarkar 3 is a different game altogether for the 33-year-old actor. In this film, he shares screen space with stalwarts like Amitabh Bachchan, Ronit Roy, Jackie Shroff, Manoj Bajpayee and others. The film is a typical RGV thriller without the glitz and song-dance sequences. Sadh has lived up to the director’s expectations of portraying Chiku, who like his father Vishnu, is defiant.

Besides Amit Sadh, his on-screen love interest Yami Gautam is another surprise element in the film. After gaining accolades for playing a blind woman opposite Hrithik Roshan in Kaabil, Yami has gone beyond comfort zone to take up a challenging role of Annu, who will extract revenge from Sarkar. She starts dating Shivaji, who is her sworn enemy’s spoilt grandson. This is the golden opportunity for Yami to prove critics wrong, who termed her acting talent limited to fairness cream ads.

Hats off to auteur: Last but not the least, meet the man behind Sarkar. Ram Gopal Varma, who prior to Sarkar series, gave us critically acclaimed films like Satya, Rangeela, Company, Bhoot, Rakth Charitra 1 &2 and others. Although few of his films have not done well in recent times, but nobody can question RGV’s filmmaking style. Every single element in his work, right from lighting to characters, is a specimen of his excellence. Whether he succeeds in keeping the viewers glued to their seats, we will come to know on May 12.

Also read: Watch: Amitabh Bachchan’s voice in Ganpati Aarti for Sarkar 3 will give you goosebumps