Fawad Afzal Khan is a prominent Pakistani film actor who is equally popular in India. Despite facing opposition here due to fringe groups opposing Pakistani actors from working in Bollywood films, the 35-year-old actor has made a mark for himself with films like Khoobsurat and Kapoor & Sons. It is no denying fact that Fawad is a superstar in his native country. But is he more popular than Bollywood A-listers like Shah Rukh Khan, Salman Khan and Akshay Kumar? Shockingly, the answer is not.  The Ae Dil Hai Mushkil star lags behind in Pakistan according to Google Trends data.

As per the data compiled on Google Trends since January 1, Shah Rukh Khan and Salman Khan are involved in a neck-to-neck contest in Pakistan. The dominance of both the superstars is such that Fawad has been relegated to single digits in terms of searches in recent times. Akshay Kumar, who is known for essaying patriotic roles in films is no less popular as compared to his Bollywood counterparts. Due to the widespread buzz due to Tubelight, Salman has raced ahead of Shah Rukh in terms of Google searches. Sadly, his latest 1962 Sino-Indian war drama flick could not release in the neighbouring country due to distributors preferring local films Shor Sharaba and Yalghaar.

From Sindh to Balochistan

If we compare the popularity of Fawad with Bollywood stars like Shah Rukh, Salman and Akshay, the Zindagi Gulzar Hai actor lags far behind in major provinces of the country except Pakistan Occupied Kashmir (PoK). Even in this region, he faces stiff competition from the Khiladi Kumar.

Fawad Khan belongs to Karachi, the capital of Sindh province of Pakistan. You would expect him to enjoy an unparalleled fan following across all spectrums, including Google. Shockingly, the users there are more concerned about Shah Rukh and Salman. Fawad is most searched by users in cities like Peshawar, Rawalpindi and Lahore. 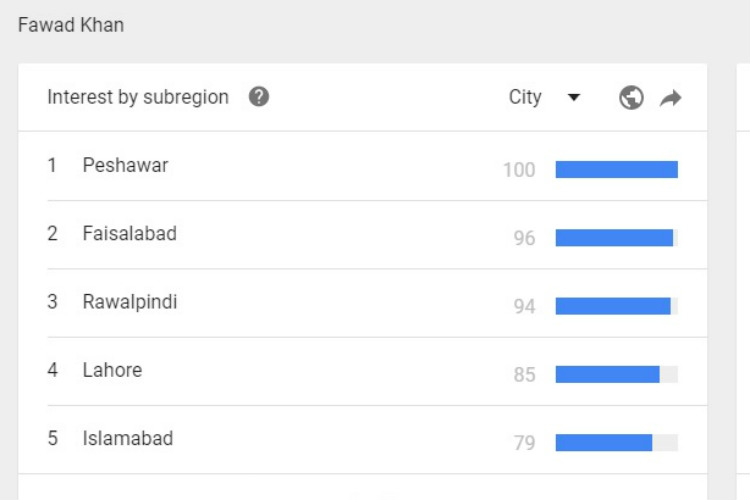 Salman Khan’s 2016 wrestling drama Sultan is the highest grossing Indian film in Pakistan. His 2015 blockbuster Bajrangi Bhaijaan raked in Rs 23 crore here as well. The Dabangg actor is ahead of SRK, Akshay and Fawad in all the regions of Pakistan except Khyber-Pakhtunkhwa. Here, it is his Karan Arjun co-star Shah Rukh who is the most searched celebrity there. 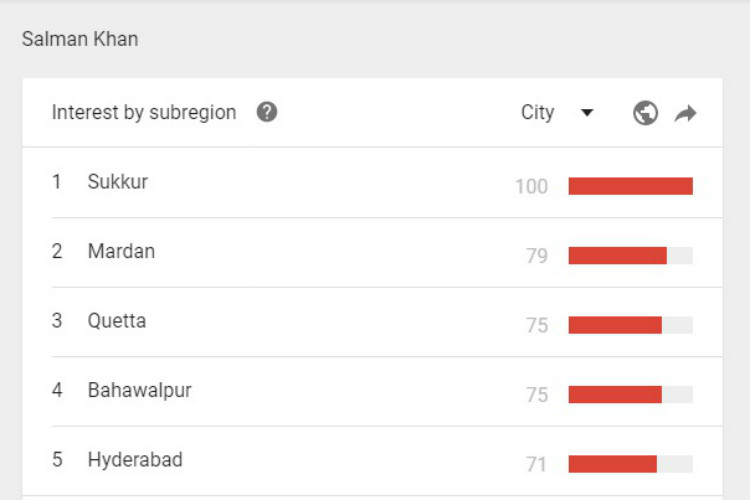 Akshay Kumar is known for portraying roles that are high on patriotism and likely to be disliked by Google users in Pakistan. Surprisingly, the actor is third after Salman and Shah Rukh in Punjab, Sindh and Balochistan. The Jolly LLB 2 actor is popular in cities like Hyderabad, Multan, Peshawar, Gujranwala and Rawalpindi. 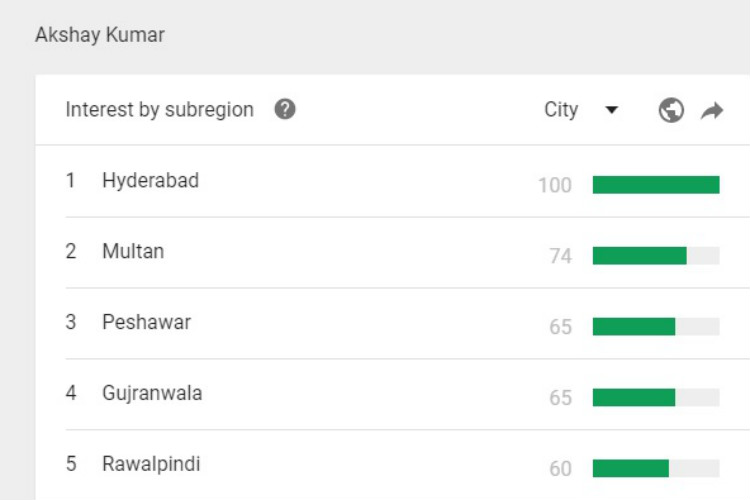 Akshay Kumar is popular cities of Gujranwala, Rawalpindi and Hyderabad.

Although Salman Khan rules urban areas of Pakistan in terms of Google searches, you just cannot ignore Shah Rukh Khan. The 51-year-old actor is a hot favourite among netizens in Abbottabad, Mardan, Quetta and Peshawar. There, the people mostly search for his movies. 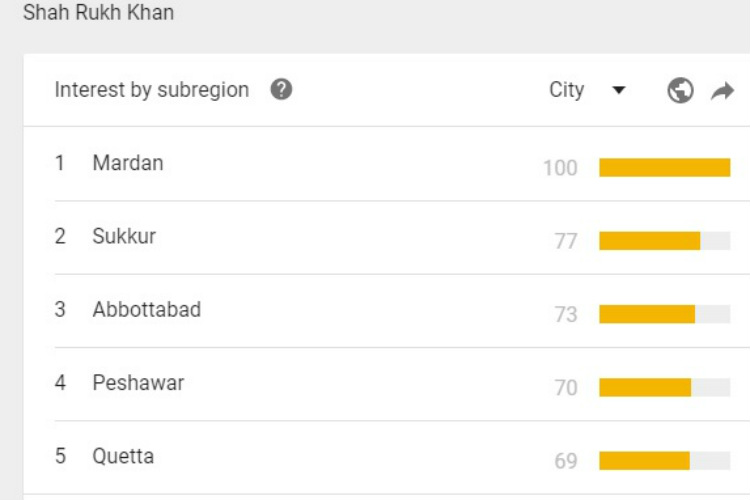