Mukesh Chhabra’s Dil Bechara concludes in peculiar fashion. Audience members look at a big screen with tears in their eyes as a ‘film’ (within the film) plays. It’s a string of visuals of Immanuel Rajkumar Junior (Sushant Singh Rajput) at his happiest, silliest and most jovial self. Almost looking like a memoriam, this sequence could be mistaken for the director turning the camera on his audience, who are probably reacting to watching Rajput for the last time. If we didn’t know about the film’s source material, we would be led to assume that the writers had somehow ‘predicted’ his sudden departure, and come up with this fitting farewell.

Having said that, watching Dil Bechara is like scrolling through a departed person’s social media feed, trying to trace his life, find some hidden meaning in every innocuous gesture, something we have all done with varying degrees of intensity . Like when he’s wearing a t-shirt that says ‘HELP!’, or a few moments later saying main kaafi commercial hoon. Was he crying out for help? Was Rajput cheekily breaking the fourth wall to address producers who didn’t consider him ‘viable’? Looking back, it’s easy to attribute meaning to the most arbitrary things. Few will be able to not get distracted by the shrill discourse around the film and recognise it for what it is.

Adapted from John Green’s 2012 novel, The Fault In Our Stars, and a 2014 Hollywood film of the same name starring Shailene Woodley and Ansel Elgort, Dil Bechara prioritises “cute” over heart from the very beginning. Green’s bestselling novel seemed to address the fatigue around the genre of ‘cancer’ literature at the very beginning, even if it eventually goes around ticking all the cliche boxes in the most charming manner possible. Green’s leads Hazel Grace Lancaster and Augustus Waters, feel like flesh-and-blood human beings, despite their stereotypical character outlines. One is a nervy, new girl with a strong mind. The other is an annoying, upbeat boy, who eats sunshine for breakfast and sounds like a walking/talking motivation poster.

For teenagers spouting profundities, both the book and the 2014 film seemed to acknowledge how silly it seems for youngsters to say things like ‘seize the day’ to each other. Augustus Waters skirts around ‘metaphors’ like an unlit cigarette and talks about his ultimate fear – ‘oblivion’ , but it rarely comes across as pretentious. The Hindi version, while remaining faithful to Green’s words (‘okay’ is ‘seri’, ‘always’ is ‘hamesha’… even retaining ‘the body lit up like a Christmas tree’), fails to borrow any of this free-flowing sincerity.

Kizzie Basu (debutante Sanjana Sanghi) opens the film with a deadpan voice-over, telling us how her life ‘sucks’ because she has cancer. She tells us about her dreams: like any other teenager she wants to befriend the hottest looking boy in college, she wants to go out on dates. She also seems to like to attend funerals of strangers, trying to comfort them. Any facade of her being an introvert, skin-deep cynic falls once we hear her broken Bengali. Even for a debutante, Sanghi’s delivery is so thoroughly inept that it makes you question if these layers of playing a ‘Bengali’, born in Zambia, raised in Jamshedpur, were necessary at all. Why not let her be just another teenager, who parades around with a designer oxygen cylinder called Pushpinder (no, it doesn’t matter why). Much like another debutante Alaya F in last year’s Jawaani Jaaneman, even Sanghi has a warm presence. But it’s too much to ask her to play a cancer patient, who is Bengali, and then pretend like she’s lived in Jamshedpur all her life.

Immanuel Rajkumar Junior probably uses the excuse of being a Rajinikanth fan, for his boisterous behaviour. It’s supposed to be arrogant and self-centered, but the original character also has a disarming kindness to him that Rajput fails to bring. Instead, he plays it ‘quirky’ throughout, which can become agonising after a point. There’s more than one scene where Rajput’s performance seems like a homage to Shah Rukh Khan. In one scene, he says dus minute with the intensity of Sattar Minute, and he always seems within swatting distance of saying jiyo, khush raho, kya pata… kal ho naa ho. Rajput had always maintained his wide-eyed admiration for Khan, given their similar journey from nowhere to the heart of stardom. So it doesn’t seem ludicrous to believe how Rajput probably looked at this as an opportunity to create his own Aman Mathur.

It’s not the first time we’re seeing an upbeat terminally-ill patient in a Hindi film, but what’s sad about Rajput’s final performance is that he never quite brings about an individuality to it. Looking like a grand tribute to all such characters, from Anand to Aman, Rajput’s performance feels rehashed and insincere. Towards the end of the film, where a cancer-afflicted Immanuel has snot dripping from his nose, even that comes off looking like bad makeup. Despite the film’s fairy-tale tone, both leads never feel rooted enough for their actions to have consequences. Their love story looks like a chemical equation that simply doesn’t add up, and yet we’re expected to root for it.

The limitations of the lead characters becomes all the more apparent in front of naturals like Saswata Chatterjee and Swastika Mukherjee, playing the roles of Mr and Mrs Basu. Chatterjee especially, having played the ‘cool father’ in Jagga Jasoos, nails his performance with gestures and body language alone. Mukherjee too is convincing as the grieving mother who says more with her concerned stares than with words. Saif Ali Khan stars in an odd cameo, which was essayed by Willem Dafoe in the original film. A ‘wild’ character and his subplot supposed to elicit shock and awe, come off looking too heavy-handed in the Hindi adaptation. 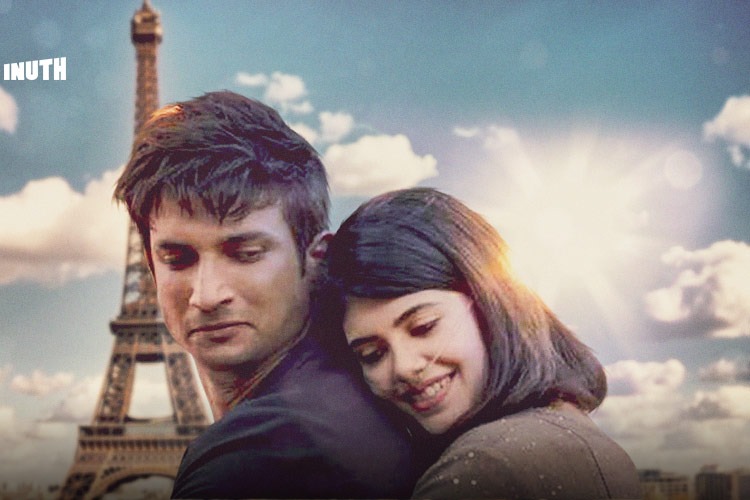 However, it is director Mukesh Chhabra, who should own up to Dil Bechara turning out to be the misfire it is. He seems to have bet big on the ‘look’ of the film, without investing enough heart into the bestselling material. He punctuates most emotional scenes with the violins from The Horizon of Saudade. Rahman’s fluid soundtrack is the only highlight in a film with otherwise empty aesthetics. The ‘funny scenes’ seem like they’re trying to tickle you into a laugh, the ’emotional scenes’ feel distant, the ‘moving finale’ (especially the last frame of a *smiling* Sushant Singh Rajput) feels like stone-cold manipulation. As more unfulfilled promises lie at the end of this, the universe seems to be gently probing the question – ‘could Sushant Singh Rajput’s stars have been less aligned?’