Shah Rukh Khan is in Delhi to promote his film Raees. He took a day-long train ride to travel from Mumbai to Delhi and met his fans on the railway stations. One died, several others got injured in the chaos that happened at the railway stations where SRK’s train stopped. The promotions still went on. The happy journos with dear King Khan kept on tweeting the filtered facts. The PR people kept clarifying that the man did not die of the stampede but due to a heart attack. Just a few questions:

1. Was Shah Rukh Khan not aware of his stardom? Didn’t he know that his traveling by train, and publicizing the journey so much would ultimately lead to an ‘invited chaos’ at the railway stations?

2. Why didn’t his PR team or whoever was involved in this promotional campaign ensure a proper security organization, even after clearly declaring the name of the stations where the train was supposed to stop?

3. With the already pathetic conditions, the railway stations in our country have, was #RaeesbyRail really necessary?

When I wrote an agitated post on my Facebook timeline about this fiasco, I got a reply where somebody claimed that ‘a person’s safety is in his/her own hands’. No star can be blamed for this.’ Why? why shouldn’t SRK and his team be blamed for this? Films come and go. Thousand other Raees will arrive. We will celebrate the arrival of SRK on the big screen many times in future too. But a life lost will never come back. A person died will never be alive. Are you trying to tell me that a star of SRK’s stature did not see it coming? Are you telling me that Shah Rukh Khan, who is also a very good businessman and quite a good marketer of his films, did not have any idea that his rail journey was bound to create hysteria? Or are you telling me that a man whose bungalow — Mannat, is always surrounded by myriads of fans, couldn’t predict that people will act crazy to have one glimpse of him? 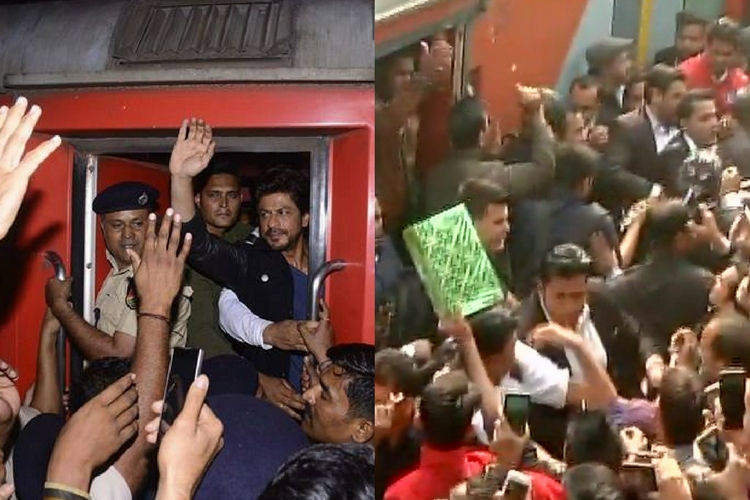 The entire journey was promoted heavily. From the timings of the journey to the halt that the train had taken at railway stations, to the menu of SRK’s food, everything was planned and publicised in advance. After all, he is the ‘first Khan’ to have travelled by train for his movie promotion. If so much of brainstorming was done to promote the journey, a little thinking could have been done to maintain the security standards of people at the stations. And for people who think that it was solely the duty of the railway authorities to maintain safety at stations, it was NOT. As a fellow journo told me:

If you go by Indian law – The shooting parties are required to take Comprehensive Insurance against all possible risks/damage of railway assets (movable and immovable including rolling stocks) proposed to be used, as also for death or injury to any person(s) on the Railway property including Railway staff at the time of the shooting of the film with provision for full compensation as decided. Now tell me who is responsible?

Shah Rukh Khan loves to interact with his fans. I respected his gesture when he had arrived for an interview a few hours late. But, he made sure to compensate that by spending a few extra hours just to interact with his fans after that interview. I like how articulate he is and how he takes an active step in the promotion of his films. SRK is aware of the success he has earned and the stardom he enjoys. Then, what led him to just take that for granted? With such a tremendous buzz his train journey had created, a lot of other unfortunate incidents could have happened. I am sure a lot of people, who had serious business in travelling by train the past night must have missed their trains, because of such huge gathering.

Will SRK’s condolence to the family of the deceased help? Even if we agree that he didn’t visit the station to meet SRK, the reason behind his breathlessness and cardiac attack is the ‘expected’ public excitement to see Shah Rukh Khan. And all this at for what? To drive more audience into theatres? To win the Box Office battle? Dear peeps, if only SRK could make his film a success through promotions, Happy New Year, Dilwale or Fan would not have received the fate they did at the Box Office. What can or clearly does lead to a success of a film, be it an SRK or anybody else, it’s the content. If a film is good. If it leaves the audience with some thoughts. If it has the potential to touch audience’s hearts, it will do well. Such promotions can only give the makers a good opening day maybe but it’s the content that speaks after Saturday. In the case of Raees, which is releasing on Wednesday, the content will speak post-Friday.

Also, why didn’t this idea of promoting his film by travelling in a train strike him during Chennai Express? #JustAsking