Kapil Sharma is not in good health these days. There were three instances when he cancelled the shooting of The Kapil Sharma Show because he was unwell. His flagship show is battling poor TRPs and getting ill has made it even worse for the actor-comedian. Amid the lows, he does have something to cheer about. Sharma is more popular than Shah Rukh Khan and Akshay Kumar on Facebook.

According to Facebook data analysis website Social Bakers, Kapil Sharma boasts of 26.09 million followers on the social media website, more than Shah Rukh Khan (23.60 million) and Akshay Kumar (23.70 million). The news will bring a some relief to Sharma, who has been in the midst of a controversy owing to his fallout with fellow comedian Sunil Grover.  Following a mid-flight spat, while returning from Melbourne to Mumbai, he allegedly abused is former colleague Grover, who essayed the dual roles of Rinku Bhabhi and Dr Mashoor Gulati on TKSS.

On Facebook, Sharma has 20.81 million Indian fans whereas the Khiladi Kumar comes second with 15.74 million followers. On the other hand, Shah Rukh has only 10 million fans rooting for him in India. Now, here’s something very interesting that you need to know. The comedian gives stiff competition to the Jab Harry Met Sejal actor in Pakistan with 1.95 million fans as compared to the latter’s 2.07 million supporters even though Shah Rukh Khan’s 2015 release Dilwale turned out to be the fifth highest grossing Indian film in Pakistan.

Also read: Salman Khan has more followers than Shah Rukh Khan on Facebook, but there is a twist

Akshay Kumar, who is known for playing portraying patriotic roles is behind the duo with 1.92 million followers. The 49-year-old actor will be seen in Sree Narayan Singh’s Toilet: Ek Prem Katha that releases on August 11. Sharma has turned producer and will also act in his upcoming film Firangi whose release date has not been announced.

Both Akshay and Shah Rukh have appeared on TKSS to promote their films. Shah Rukh promoted Dear Zindagi and Raees on the show hosted by Kapil Sharma. However, shooting of the episode which was to feature him and Jab Harry Met Sejal co-star Anushka Sharma got cancelled after Sharma fell ill. Meanwhile, Akshay promoted Rustom, Housefull 3 and Jolly LLB 2 on the show. 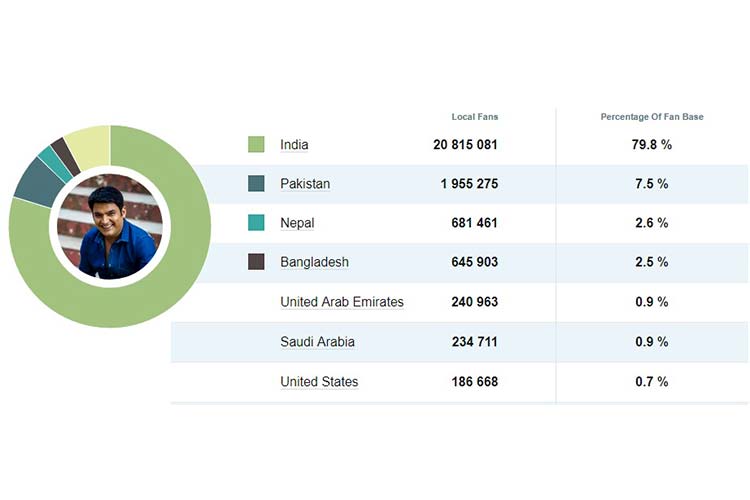 We wonder what Sunil Grover has to say on this.