During promotions of Rangoon, Kangana Ranaut along with her co-star Shahid Kapoor appeared on The Kapil Sharma Show. The show’s host  Kapil Sharma entertained the guests with his funny one-liners. The audience and Navjot Singh Siddhu (obviously) responded to his jokes with applauses and laughter. Little did our Jaanbaaz Julia know that the epic moment of the show would come towards the last segment.

And guess what! Kangana was left teary-eyed as she could not control her laughter. She and Shahid were left bursting into frequent squeals of laughter in a mock set-up of reality show Kaun Banega Crorepati (KBC). And guess who was asking them funny questions? Kapil Sharma? No. It was a sari-clad Rinku who also doubles up as Dr Mashoor Gulati in the show. His real name is Sunil Grover and has been in and out of Kapil’s show since inception. Although Kapil is now a celebrity stand-up comedian, actor and producer (he is coming up with his upcoming venture Firangi), it is his team which has made the show a successful one. And not to forget the contribution of Grover, who earlier donned Chutki, which became a household name overnight. Just look at Kangana’s reaction in that hilarious sequence in the show.

In the past few days, a lot has been reported on the alleged brawl between Sunil Grover and Kapil Sharma on board a flight from Melbourne to Mumbai. In an inebriated state, Kapil is said to have manhandled and abused Sunil as the latter stood silent. Later, Kapil took to Facebook to avoid further controversy and term it as an argument related to work. He even took to Twitter to apologise to the comedian.

Just when we thought that things would have settled down for good, Sunil reacted and gave the show’s host a taste of his own medicine.

It seems that Sunil might leave the show after the entire fiasco. If it happens, the show might receive a bigger jolt. We know that TKSS is a platform for film promotions wherein B-town celebs share stage with the comedian and laugh their hearts off. If Kapil plays a gracious and jolly host, the guests eagerly look forward to meet his team comprising Ali Asgar, Sumona Chakraborty, Chandan Prabhakar and of course Sunil Grover.

Right from Chutki to Dr Mashoor Gulati, Sunil has been an integral part of the show. Few years ago,  he fell out with Kapil over monetary issue and starred in show called Mad In India. However, he made a comeback to the show and earned a name for himself in the second innings. In other words, he is inseparable from TKSS. It is perhaps the main reason why Kapil is trying hard to persuade Sunil into not quitting the show. 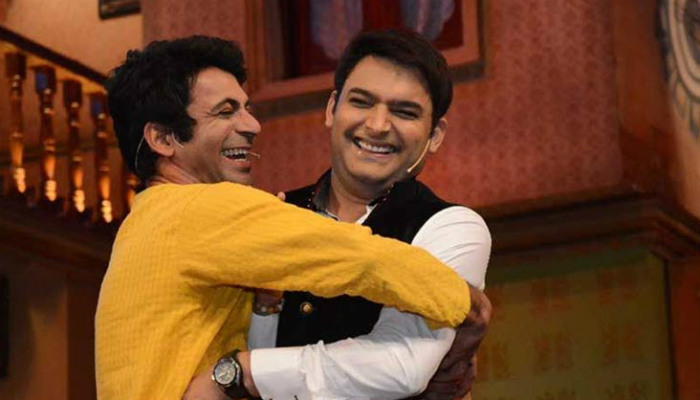 We hope things get sorted between the ace comedians and we soon get to see them set the screen on fire together.