Aamir Khan’s Dangal has crossed Rs 500 crore mark. After taking the Box Office by storms in India, the biographical sports drama is on a record-breaking spree in China as well. The film collected $4.13 million (Rs 26.47 crores) on Wednesday, May 17th in #China – Taking the 13 days collection the film now stands at $79.18 M (₹509.44 Cr) according to trade tracker Ramesh Bala‏. After Baahubali 2, Dangal becomes the second Hindi film to cross Rs 1000 crore mark at the Box Office. The film currently stands with a total worldwide collection of Rs 1221.20 crores. The movie, released in around 7,000 screens in China.

In week two of its release, Aamir Khan’s film did a business of $ 6.40 million on Friday, $ 13.97 million on Saturday, $ 12.72 million on Sunday, $ 4.86 million on Monday and $ 4.92 million on Tuesday, minting a total of  $ 65.13 million which is approx Rs 450.39 crore. A biopic of former Indian wrestler Mahavir Phogat, Dangal had also resonated well with the Indian audience, generating over Rs 385 crore ticket sales upon its release in India.

The movie, which is about a gritty wrestler from small town training his daughters to become world-class wrestlers, has already broken the record of Aamir Khan’s PK which earned Rs 100 crore in China.

After crossing Rs 500 crore at the Box Office and still counting, it won’t be wrong to say that Dangal is all set to create history in China. Take a look at the breakdown of the collection here: 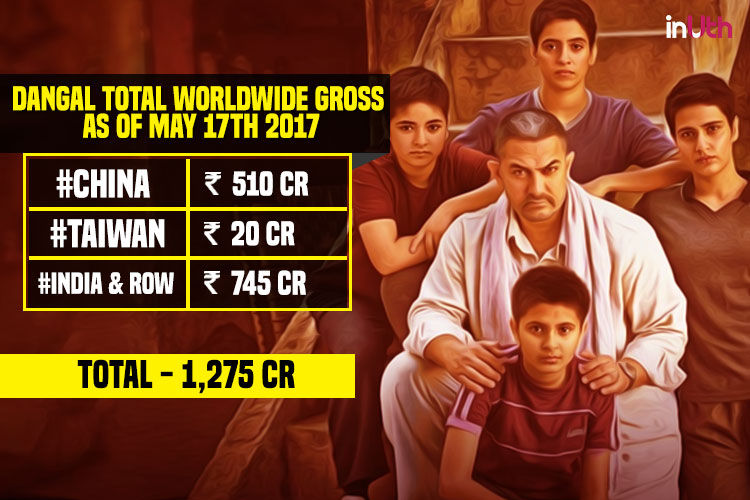