If you are a fan of Alia Bhatt, here is a good news for you. The bubbly actress is all set to launch her own experimental game named after herself. This first of its kind game made for all Bollywood fans has been made possible after collaboration between Alia and Moon Frog. Alia took to Twitter to announce this news. She wrote, “Getting ready to step into the virtual world! Coming soon.”

In the graphic she shared, Alia and her animated version can be seen playing Holi. The android app of the game read, “Start from the bottom and rise to the top, be a Bollywood A-list star in Alia Bhatt: Star Life – Experience fame, fortune, fashion and lots of masala with your best friend, Alia Bhatt. Thank you to all who pre-registered and install today… log in to the game tomorrow and get your welcome gift.”

The introductory lines of the game tell that it will really be a treat for all fans of Alia Bhatt. On Alia’s birthday, her Badrinath Ki Dulhania co-star Varun Dhawan had shared a cute cartoon of Alia to wish her. 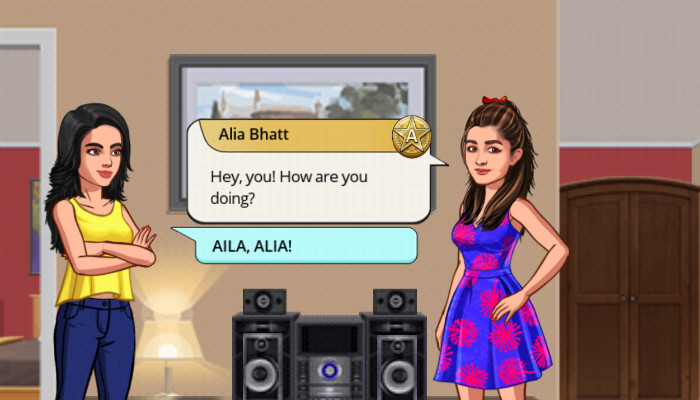 Getting ready to step into the virtual world! Coming soon 🙂 pic.twitter.com/AgInfr1Mop

Alia Bhatt is currently riding high on the success of Badrinath Ki Dulhania. Since its release on 10 March, the film has earned Rs 93 crore. In this Shashank Khaitan directorial, Alia essayed the role of a staunch feminist Vaidehi. She fell in love with Badri, played by Varun Dhawan. Their lives took an unpleasant turn when their ideologies clashed.

The actress has also been roped in for Ayan Mukerji’s directorial Dragon which features Ranbir Kapoor and Amitabh Bachchan.