In the ongoing tussle between the makers of Rangoon and the Wadia Movietone Pvt. Ltd, a new twist has emerged. The latter, who dragged the makers to the court, have now alleged that not one but 19 scenes of Rangoon resemble the 1935 film Hunterwali. The matter saw the light when Wadias filed a commercial lawsuit alleging copyright infringement. They claimed Kangana’s character in the Vishal Bhardwaj directorial is modelled on Fearless Nadia aka Mary Evans.

The 1935 film was produced by Wadia Movietone Pvt. Ltd and in the case they filed in Bombay High Court, they said copyright to Nadia’s story belonged to them.  They claimed posters and trailer of Rangoon have a total of 19 scenes which has been lifted from Hunterwali. They alleged that the way Kangana wielded the whip resembled Nadia. The Wadias also have an issue with Kangana’s Bloody Hell, which they have said was Nadia’s famous dialogue.

In their petition, Wadias have also submitted an email exchange between  Vishal Bhardwaj, Ronnie Screwvala and Siddharth Roy Kapur. They had approached them with the story only to get a reply 13 months later that it didn’t have the potential to become a movie. 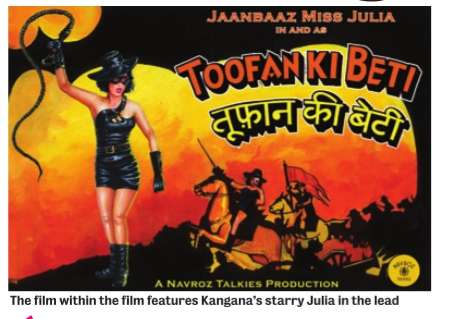 It’s a clear case of copyright infringement. Both the character as well as the script have been copied. Only instead of Fearless Nadia, Kangana’s character has been named Jaanbaaz Miss Julia, a representative from Wadia told Mid-Day.

However, Kangana has vehemently denied these claims. The actress told IANS:

I think there is some legal hassle around that. First of all, we cannot comment on a matter when it’s already in the court, but we can assure you that it’s not based on any living or dead person.