Bollywood is yet to find a true blue gen-next superstar since Hrithik Roshan, who became the talk of the town after the release of his debut film, Kaho Na Pyaar Hai. Several young actors have tried their luck on the big screen but none have managed to strike a chord with the audience. The current pool of Gen Y actors includes Ranbir Kapoor, Varun Dhawan, Ranveer Singh, Sidharth Malhotra, Arjun Kapoor and Shahid Kapoor.

The current decade has seen all of the aforementioned actors feature in more or less same number of films, because of which steady comparison between them is inevitable. With the Khans, Akshay Kumar, Ajay Devgn and Hrithik Roshan still going strong at the Box Office, it hasn’t been an easy journey for the younger lot of actors to build a prominent fan base.

Also read:  Box Office analysis: Why Salman Khan is the biggest superstar of this decade so far, followed by Aamir Khan and SRK

Here we rank the actors (who have more or less acted for the same number of years) on basis of their films’ Box Office performances in this decade: If there is one actor who has shown glimpses of being a superstar, it is Varun Dhawan. The actor’s fan following both among children and the youth is growing with every passing film. His script selection has also helped him build a trust factor among the family audience. Dhawan, who made his debut with Student Of The Year (2012), has acted in 8 films till date and to everyone’s surprise, the actor is yet to deliver a single flop.

Varun has maintained his stance of making films for the larger audience and has so far not taken a wrong step. With Judwaa 2 and October in the pipeline, Dhawan’s track record is expected to improve further. His 8 releases have collected a total of Rs 692 crore with average collection per film falling in the range of Rs 86.50 crore.

Box Office performance apart, Varun also comes across as a very likable and accessible person on the public platforms. His consistency makes him the most bankable young star. 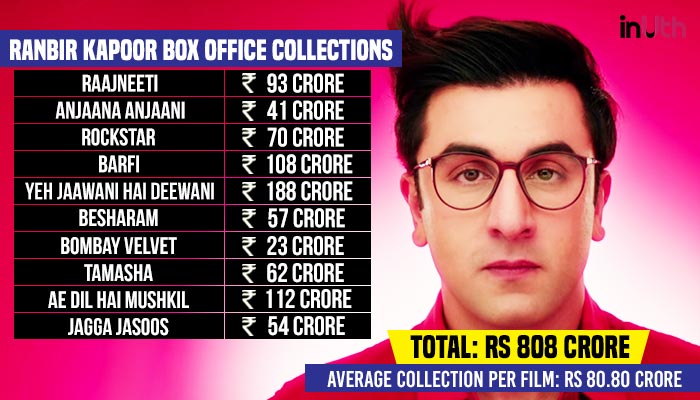 Ever since his debut in 2007, Ranbir Kapoor has been touted as a new age superstar. Films like Yeh Jaawani Hai Deewani, Barfi and Ae Dil Hai Mushkil have shown the actor’s capability to fetch people into the cinema hall. However, his inconsistent and poor decisions on the scripts have taken a toll on his popularity.

Given the right script, Ranbir Kapoor would easily edge over Varun Dhawan, but the actor has failed to get audience flocking to the cinema hall regularly, because of which he loses out on the number one position to Varun Dhawan.

Excluding Roy, which had Ranbir Kapoor in an extended cameo, the actor has featured in 10 films which in aggregate have collected Rs 808 crore. The average collection per film falls in the range of Rs 80.08 crore, which is approximately Rs 6 crore lower than of Varun Dhawan. 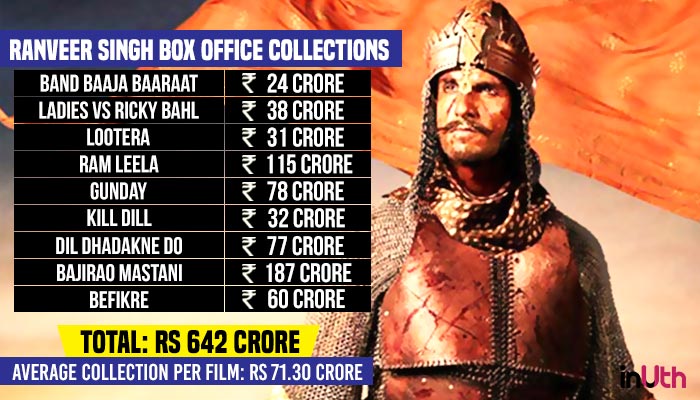 Ranveer Singh’s filmography is a mixed bag as the actor has failed to show consistency in delivering hits. Ram Leela and Bajirao Mastani are the only two films to cross the Rs 100 Cr. which not only showcased his ability to fetch an audience but also showed Ranveer’s potential as an actor.

The biggest hits of Ranveer Singh’s career includes Ram Leela, Bajirao Mastani and Gunday whereas Ladies vs Ricky Bahl and Kill Dill are his biggest failures. Ranveer has featured in 9 films this decade which in aggregate collected Rs 642 crore with average collection per film falling in the range of Rs 71.30 crore.

To Ranveer Singh’s credit, the actor’s lively persona has helped him build a fan following among the masses and his upcoming venture with Rohit Shetty would help explore a greater set of moviegoers. 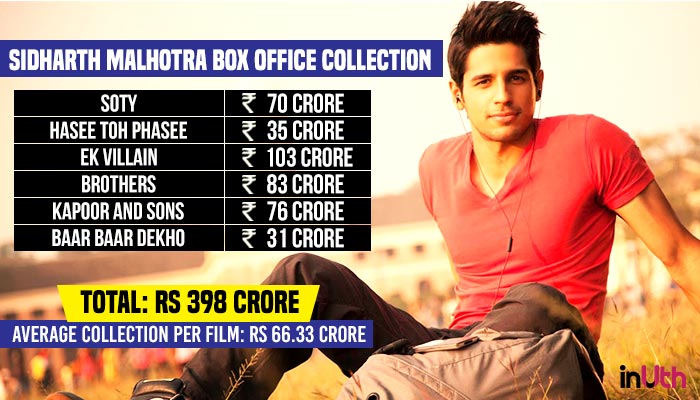 Sidharth Malhotra has been fairly consistent ranking low, with Ek Villain being his highest grosser till date. Unlike the above-mentioned actors, Malhotra chose a different route by taking up unconventional commercial subjects like Kapoor and Sons, Hasee Toh Phasee and Baar Baar Dekho in a span of just 6 years.

Films like Hasee Toh Phasee and Kapoor and Sons did decent business given their restricted budget, however, to establish himself as a top star Sidharth Malhotra requires being a part of a few big budget commercial films which would give him the opportunity to appeal to a wider audience base.

Also read:  A Gentleman’ Siddharth Malhotra on why he feels he is ahead in the race despite no filmy connections

Another problem with Sidharth is the fact that there are huge gaps between his film releases and a young star like him needs to maintain his presence on the screen to make himself familiar with the audiences. The actor has 3 releases in the next 7 months which would give a clear picture about his standing in the industry.

The actor has featured in 6 films till date which have collected approximately Rs 398 crore with average collection per film falling in the range of Rs 66.33 crore. 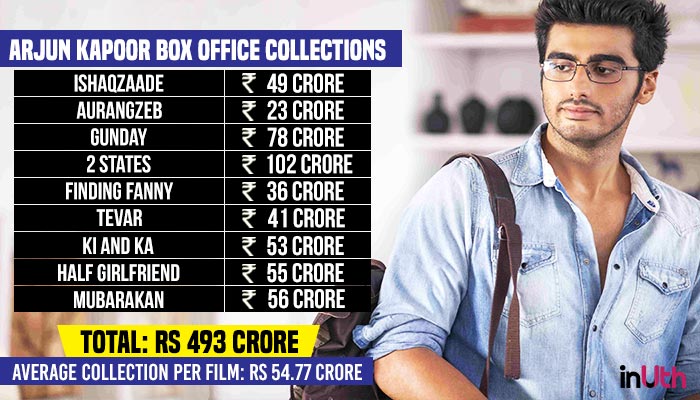 Arjun Kapoor has been bashed far too often for the kind of work he has done in the industry. Just like Sidharth, even Arjun Kapoor hasn’t got as many commercial films to his credit because of which his average collection per film falls in the range of Rs 54.77 crore. Arjun Kapoor has acted in 9 films till date and 6 of them proved to be average or hit because of their controlled budget.

Arjun acted in an out and out commercial film, Tevar, which failed to do wonders at the Box Office, however on the flip side, romantic comedies like Ki and Ka, 2 States and Half Girlfriend did manage to fetched decent to a good response at the Box Office. While Arjun yet hasn’t molded himself into a superstar, good selection of scripts can help him stand strong against his contemporaries.

Also read:  Mubarakan Box Office decoded: This Arjun Kapoor film is anything but a flop and numbers don’t lie 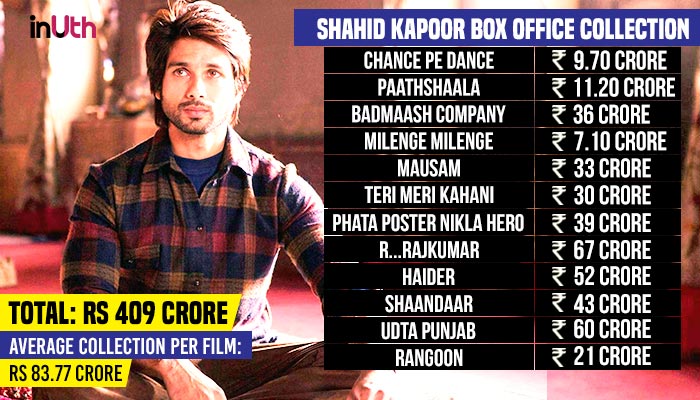 Shahid Kapoor is one of those actors who has had an opportunity to explore different genres but failed to succeed in any of them. Right from comedy to romance to action to drama, Shahid Kapoor has acted in all kind of films, however, none of them helped him bag a super-hit. Despite being around for over 14 years, Shahid Kapoor is yet to deliver a Rs 100 crore film. His highest grossing film till date is R… Rajkumar, which raked in Rs 67 crore at the Box Office.

After a string of failures, Shahid Kapoor has now begun to establish himself as an actor and given up on the star tag, which seems to be working for him.

This decade, Shahid Kapoor has acted in 13 films which in aggregate have collected Rs 409 crore and average collection per film falling in the range of Rs 31.46 crore.

Kapoor has the looks, acting talent and the ability to dance, however, his terrible script choices have curtailed his chances of being a bankable star.