The first half of 2017 has ended with the release of Salman Khan’s Tubelight, which failed to set the Box-Office on fire.The year so far has been disappointing with the reasonably big films like Raees, Kaabil, Rangoon, Phillauri, Sarkar 3, Half Girlfriend, Tubelight, and Raabta failing to live to the hype. The two films which fared as expected were Jolly LLB 2 and Badrinath Ki Dulhania whereas Hindi Medium sprung a pleasant surprise by emerging as the first and only sleeper hit of the year.

The trade got some sort of respite this year in the form of Baahubali 2 (Hindi)which went on to earn over Rs 500 crore at the Box-office, thereby emerging as the biggest blockbuster in the history of Indian cinema. Unlike Badrinath Ki Dulhania and Jolly LLB 2 that did well in select pockets of India, Baahubali 2 got a phenomenal response all across the country.

Out of over the 100 films that released this year so far, merely 6 Hindi films succeeded, which in itself speaks about the state of the Hindi film industry today. Apart from Baahubali 2, the film exhibition and distribution section was saved by major Hollywood releases like Fast and Furious 8, Logan and Wonder Woman that managed to emerge ‘Hits’ at the Box-Office in India. 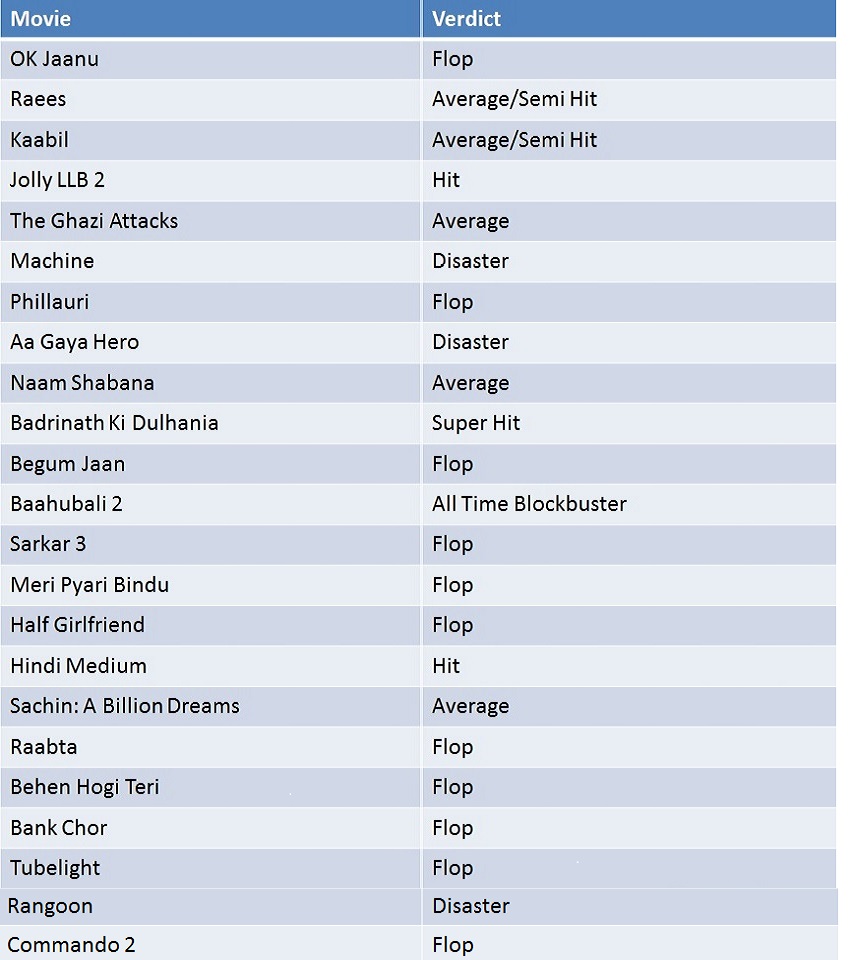 The second half of 2017 has some big releases like Jab Harry Met Sejal, Toilet: Ek Prem Katha, Baadshaho, Judwaa 2, Golmaal Again, Padmavati and Tiger Zinda Hai, that have the potential to do good business at the Box Office. Having said that, Bollywood might have to wait for the release of Tiger Zinda Hai this Christmas to get the first Rs 200 crore grosser of the year at the Box Office until and unless some film over performs.

Also read: Here’s the list of top flop films by Salman Khan which were completely rejected by fans at Box Office

As the first half of the year has proved to be a disappointing one, here’s hoping that things take a massive u-turn from here on!