According to the dictionary, an undertrial is someone who is on trial or who is imprisoned on remand whilst awaiting trial. This means that someone who has been arrested and whose verdict is yet to be pronounced becomes an undertrial. The upcoming movie Lucknow Central starring Farhan Akhtar, Diana Penty, Deepak Dobriyal, Gippy Grewal, Ronit Roy and Ravi Kishan, talks about the plight of undertrials in India. Directed by Ranjit Tiwari, the movie aims to capture the predicament undertrials find themselves in. The fact that Lucknow Central is being produced by Emmay Entertainment, an established house of Bollywood, ensures the movie gets a commercial treatment. The makers need to be appreciated for making a movie on this topic, which never got its due from the industry.

Why is it important to talk about undertrials?

As per a report of 2014 published in The Hindu, 65% of prisoners in India are undertrials. The report further stated that a large number of these undertrials are arrested and imprisoned indefinitely because of the slow judiciary.

Also read: I want to be a part of intriguing stories: Diana Penty on Lucknow Central, Parmanu and more

Technically, when the undertrials should be released

According to Code of Criminal Procedure (Section 436A), an undertrial has to be released if they have served half of the maximum period of imprisonment that their offense warrants. Most often than not, this is rarely followed mainly because of the slow judiciary; implying that a person who is sent to jail is made to stay in it, even if they are not convicted of their charges. This is an inhumane practice which sadly the Indian law has become comfortable with. 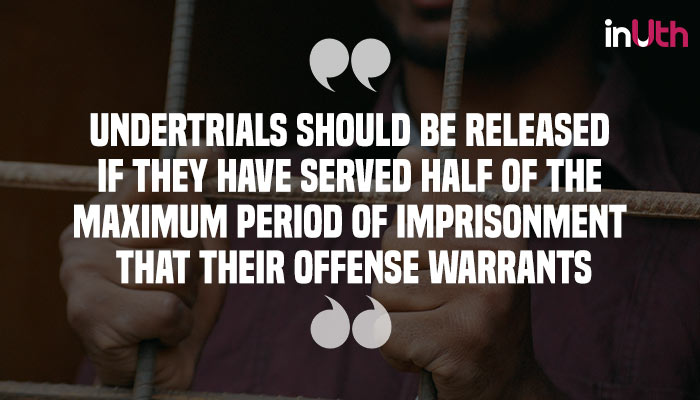 Also read: Lucknow Central and 7 other times Bollywood effectively introduced the city of Lucknow in its plot

In 2016, Chief Justice of India TS Thakur’s emotional plea to Prime Minister Narendra Modi got a lot of attention. In a speech, the former CJI had spoken about the striking deficiency of judges. He had said the country needed as many as 70,000 judges to clear pending cases. The number of judges the Indian judiciary has is 18,000, TS Thakur had pointed out. It is no news that judges and courts are overworked and the number of pending cases, just keep increasing. The disparity between the judges against pending cases is the major reason behind the plight of undertrials. Once arrested by police, the entire process of being produced before the Magistrate takes a lot of time, adding to the misery of the undertrial.

Check out this iconic scene from Damini which will tell you the reality of slow judiciary:

Attempts made by film industry:

In 2007, a movie called Undertrial released which featured Rajpal Yadav in the lead. It was the story of a father (Yadav) who was accused of raping his three daughters. No one thought he was innocent till he found a lawyer who helped him get justice. This movie managed to tell the story of someone who is being tried and also explained how the long process gets depressing.

Also read: No one wants to make a film that won’t work at the Box Office: Farhan Akhtar on Lucknow Central, Don 3 and film making

Coming back to the argument, the fact of the matter is that Bollywood has failed to depict one of the most real issues the nation faces. The rights of the undertrials are not given as much importance as it needs and we hope Lucknow Central changes that.