After being at the receiving end for playing a 60-something character in Saand Ki Aankh, Bhumi Pednekar has the unenviable job of defending her brownfacing in Bala. Several people on social media reacted to a poster from Bala, that attempts to bust myths about ‘fairness’. But choosing to do it is by hiring a fair-skinned actor and then brownfacing her, is probably what finally killed irony. It also raises an important question, do the makers really care about the issue, or do they only wish to milk it for the purposes of their film?

Speaking to IANS, Pednekar said – “See, that was the character. When people see the film they will understand that it is not making fun of colour. It is a film that is trying to break the basic bias or the obsession that people have with fair-skinned India.” She said the issue wasn’t very different from the ageism allegations against her in Saand Ki Aankh – “I don’t think there is a right or a wrong. As an actor I am doing my duty. I am an actor so that I can play different characters. If that doesn’t happen, I won’t exist. For instance, if that doesn’t happen, in Dum Laga Ke Haisha it shouldn’t have been me because I had to gain 30 kilos for the film. It should have been somebody else playing the role.”

Pednekar’s logic doesn’t stand because the bias against an actor’s weight isn’t the same as our nation’s blind adoration of fair skin. Of course, there’s a template for how a leading lady *should look* and how she should be of a certain body-type, and Pednekar broke that by gaining the weight for her character in Dum Laga Ke Haisha, and that’s admirable. But by smearing her face with make-up to play a girl with a dark complexion, she’s only denying an opportunity to an actor who was more suited for the role. The fact is, our society perpetuates a host of biases against people who are dark-skinned. 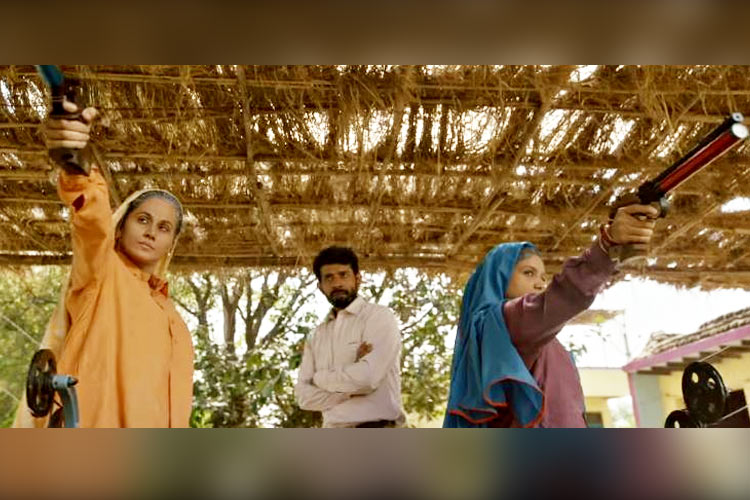 Pednekar’s co-star from Saand Ki Aankh, Taapsee Pannu was valiantly fighting the criticism directed towards the film’s casting with whataboutery. Her response was that if the male stars like Aamir Khan, Anupam Kher weren’t questioned about their respective roles in 3 Idiots & Saraansh, then why are female actors being questioned about it? Pannu was ignoring the fact that while there is little room for an actress in Bollywood, there’s even lesser room for middle-aged actresses, who are cast as the quintessential mother or aunt. Both Pannu and Pednekar’s defences are hollow in terms of logic, and sees them only furthering the agenda of a xenophobic industry.