Vidya Balan’s Begum Jaan is all set for its theatrical release worldwide on Friday and it won’t be wrong to say that the film will be one of the biggest hits fo this year. Helmed by National Award winner Srijit Mukherji, the film is a Hindi adaptation of his critically acclaimed Bengali film Rajkahini.

While many praised Vidya for her bold and fierce performance, others compared her with Rituparna Sengupta, who played the lead role in the Bengali version. From its trailer and songs to dialogues and screenplay, everything about this film is simply outstanding.

Begum Jaan is a frame to frame copy of RajKahini and tells the story of survival and hardships faced by the sex workers during India and Pakistan’s independence. Vidya Balan plays the role of brothel madam named Begum Jaan and is the soul of the film.

Apart from getting all the positive feedback, the film came under the scanner of the censor board. The CBFC not only asked the makers to tone down abuses but also chopped off some major scenes, including the ones which show communal violence and love-making. 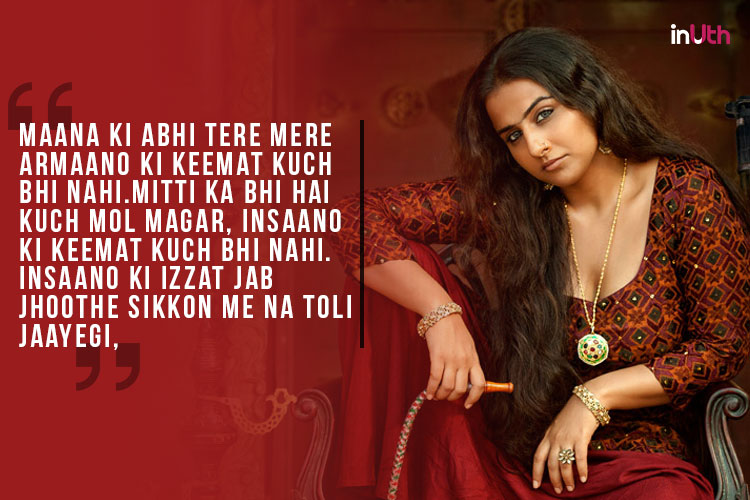 Vidya Balan in a still from Begum Jaan.

Well, one thing is for sure that this film is here to stay and will definitely set the box office on fire.

Also read: Wish Begum Jaan had been granted permission to be screened in Pakistan: Mahesh Bhatt

7:20 PM: Here it starts. Oh… And the aggression that Vidya shows. What a fierce performer

7:25 PM:  Vidya is Begum Jaan and Begum Jaan is Vidya. Wow… Not just Vidya… The other girls are also stunners

7:27 PM: Gauahar… This one platform is set to make her rise as an actor.

7:30 PM: And the epic scene is here…The decision of the Redcliffe line

Also read: Why the role of Begum Jaan got Vidya Balan super excited

7:50 PM: A heated discussion here…Hindu-Muslim and how it’s a partition of religions.

8:10 PM: This scene, when you see the inner most gruesome self of power. Kotha nahi… Kothi hai ye Begum Jaan ki…

Also read: Watch: Vidya Balan shows an unknown side of a brothel in new song of Begum Jaan

8:15 PM: This film gets more cruel as it goes on. Not meant for all, but should be watched by all.

8:20 PM: No saga of partition has been so real… No jingoism here.

Well, sorry for the spoiler but read this: Not just Padmavati but Vidya Balan’s Begum Jaan also has a strong reference to Rani Padmini