In the trailer for Anubhav Sinha’s Thappad, Taapsee Pannu plays the character of a woman filing for divorce after being slapped by her husband. Was it a common occurrence? Him slapping her? Nope. “So, it’s *just* one slap then?”, Pannu’s lawyer asks in the trailer. And Pannu responds with, “Just a slap, but he can’t hit me.”

Sinha’s film seems almost meticulously designed as a clapback to everyone who said love affairs were ‘naturally violent’ while defending Kabir Singh a few months ago. It could be argued that the 90s were a ‘different time’, but it’s also easy to see how these films normalised man hitting woman… for being were bound by wedlock.

Here are four instances when Bollywood totally legitimised man hitting a woman, after using every last trick to prove it was the ‘right’ thing to do. Of course, in all these instances, men are <forced> to raise their hand to prove they were ‘right’.

1. Hum Aapke Hai Koun
Let’s just take a moment to address violence in a Barjatya film. A film where the biggest villain was a staircase, Bindu came a close second. Unsubtly dressed as a ‘V.A.M.P’, Bindu’s character gets the campiest lines to accompany her annoying personality. Often used as the film’s comic relief, it’s understandable when she surpasses all thresholds of meanness in one scene. And that’s when a relatively subdued Ajit Vachani becomes the puts-wife-in-place husband… with a slap. Bindu’s automatic transformation ensures that Bollywood’s lazy cause-and-effect approach leaves a terrifying message for the audience. If your wife gets out of line, slap to reform.

2. Beta
Inder Kumar’s soap-opera designed as a mainstream Bollywood film, used all the popular tropes for this movie about the titular son (played by Anil Kapoor) who worships his mother (Aruna Irani). And it obviously needs a leading lady (Madhuri Dixit) to enter and become the relationship’s reality check. Dixit’s character tries her best to unmask her E.V.I.L mother-in-law, but her blindly-devoted son will have none of it. So he goes ahead and beats the living daylights out of his wife. He slaps her repeatedly, and then goes on to choke her to near-death. How dare someone call his God-like mother… a witch? 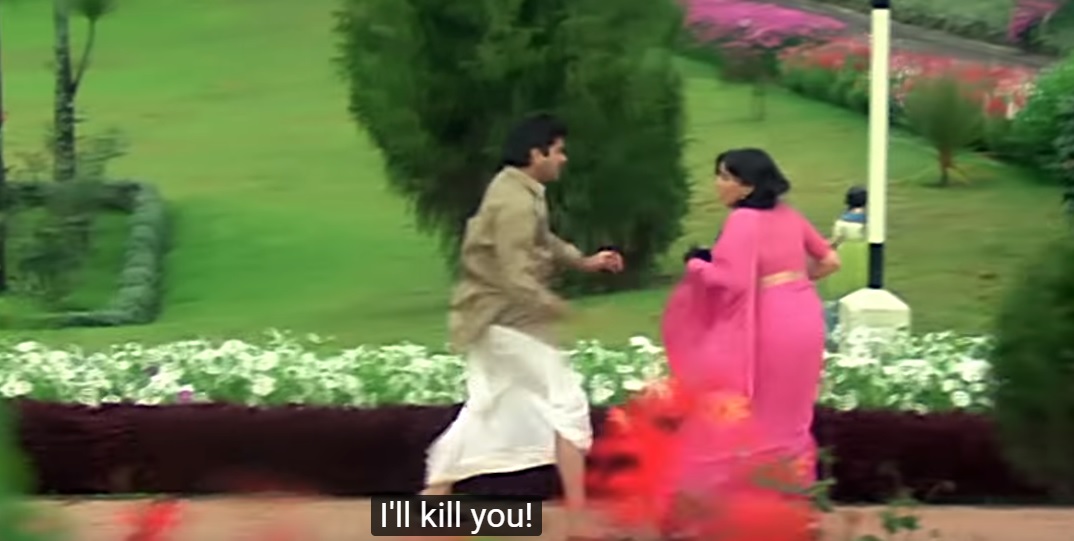 3. Dil
Madhuri Dixit teamed up with Inder Kumar once again, only to be slapped by Aamir Khan. It’s at the film’s fag end that Dixit’s character is asked to leave her husband, for his own well-being. So when she tries to excuse herself out of the marriage by saying some (pretty darn!) humiliating things, Aamir Khan takes the only logical step any 90s Bollywood hero could think of – slap the wife.

4. Laadla
Even though the two characters get married only later in the film, there’s an interesting moment between Sridevi and Anil Kapoor in Raj Kanwar’s Laadla. Being an elitist, insensitive factory owner, at one point Sridevi slaps Anil Kapoor in front of his fellow factory mazdoor union. With righteous rage, Anil Kapoor walks into Sridevi’s cabin and slaps her five times. Not once… five times. He believes in payback ‘with interest’. The optics of the scene hint at how the hero tames any woman not conforming to bharaitya sabhyata.

Will things change with Thappad? Let’s hope so.