Before making it into the Rs 1,500 crore club, Prabhas starrer Baahubali 2: The Conclusion has minted Rs 1,425 crore worldwide in 18 days of its release. The film which hit the theaters on April 28, features Rana Daggubati, Anushka Shetty, Tamannaah Bhatia, Sathyaraj and Ramya Krishnan in pivotal roles. Going by the figures shared by trade analyst Ramesh Bala, the second installment of the film has already minted 1,390 crore in just seventeen days of its release. As this SS Rajamouli’s magnum opus is refused to slow down at the Box Office, Baahubali 2 will definitely reach the Rs 1, 500 crore mark this week.

Baahubali 2: The Conclusion has become the highest grossing Indian film, and its reception has been stupendous in international markets as well.

The film has crushed box-office records across languages. It collected over Rs. 400 crore from its dubbed Hindi version alone and still counting. The film is now close to rake in Rs 450 crore at the Box Office. Trade Analyst Taran Adarsh took to his twitter and posted the detailed breakup collection Baahubali 2 has made so far. Take a look here: 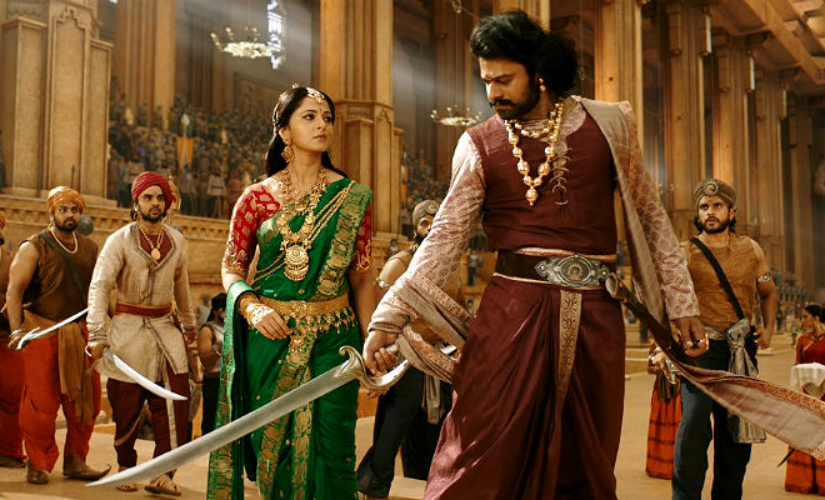 The epic scene from Baahubali 2 which has sparked debates on feminism, representation of woman in Indian cinema and giving women strong roles to play.

Also Read: Irrfan Khan explains how Hollywood and regional films like Baahubali are dividing the business of Hindi cinema

Meanwhile, Ramesh Bala took to his micro-blogging site twitter and confirmed that the film has crossed the Rs 1,400 crore mark so far. Take a look here:

Also Read: Baahubali 2 is unstoppable at the Box Office, all set to cross Rs 1500 crore mark this week

The film is about the warring battle between two cousins essayed by Prabhas and Rana Daggubati for the ownership of an ancient kingdom. Baahubali 2: The Conclusion released in over 6500 screens across India, and in 9000 plus screens worldwide.

Meanwhile, reportedly, Baahubali 2 has minted more than Rs 100 crore at INOX, one of the popular multiplex chains in India.