Finally, the first poster of Mubarakan, starring Anil Kapoor and his nephew and actor Arjun Kapoor is here. Featuring Arjun in a double role, the poster looks interesting. As promised the poster has been unveiled on cricket-based talk show Extraaa Innings T20 on the finale of the Indian Premier League (IPL). Going by the first look poster of the film we must say the Chacha Anil Kapoor and Bhatija Arjun Kapoor’s jodi is definitely going to create its magic on-screen.

In the poster, both Charan and Karan played by Arjun Kapoor can be seen lifting their Chacha (Anil Kapoor) up in their arms. While Anil Kapoor looks happily enjoying the moment.

The film will feature Arjun in a double role as Charan Singh and Karan Singh, while Anil essays his uncle Kartar Singh. This is the first time the duo will be seen working together for a film. Apart fro them, the film also features Athiya Shetty. She will be seen in the role of a simple Punjabi girl in the movie. It also has actress Ileana D’Cruz in a key role.

Meanwhile, Arjun also shared the poster on his twitter page, he wrote: When @AnilKapoor & me combine there’s bound to be double the madness double the fun !!! It’s time to celebrate, its time for #Mubarakan !!!

On the work front, Arjun was last seen in her recently released Half Girlfriend. Directed by Mohit Suri, the film is an adaptation of Chetan Bhagat’s novel of the same name. It also features Shraddha Kapoor and Vikrant Massey. Released on Friday 19, 2017, Half Girlfriend is getting mixed response from the audience. 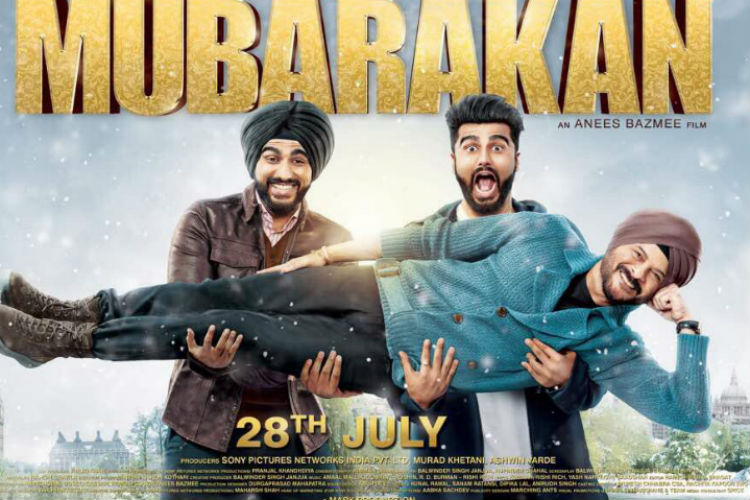 Produced by Sony Pictures Networks Productions with Ashwin Varde and Murad Khetani’s Cine 1 Studios. It is slated to release this year.