Actress Gauahar Khan is in news again. This time due the rumours around her love life. The speculations are rife that the Bigg Boss 8 winner has been dating actor Harshwardhan Rane. The reports had suggested that the two were spotted getting along at an event very well. And post that, romance sparked between the two.

However, Gauahar didn’t seem to be approving the news. And took all the reports down on Twitter. She laughed off the rumours and posted a series of tweets calling all the news items of the romance false.

Harshwardhan, one of the popular faces in the South Indian film industry, recently made his Bollywood debut with Sanam Teri Kasam. Here follow the screen shots of the tweets Gauahar made the other day: 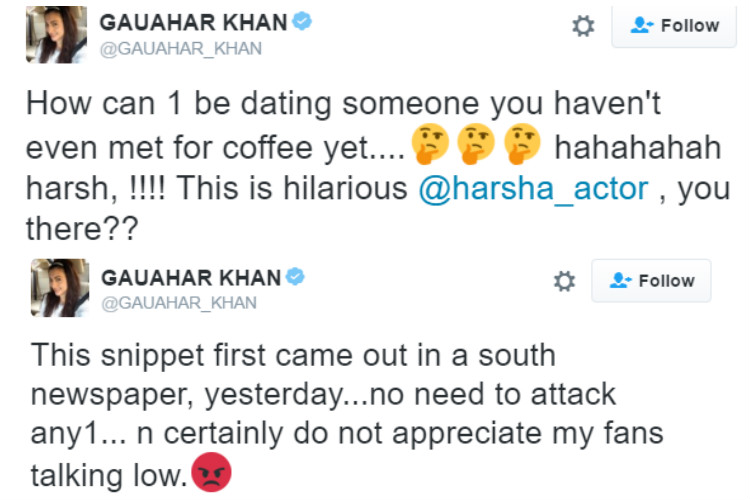 Harshvardhan also quashed all link-up rumours and said that even though there’s no reason to not like Gauahar, but there’s no romantic angle. He said:

I don’t deny that fact that I like Gauahar. She is hardworking, self-made and self-respecting. Somewhere, I see my own personality traits in her. But that’s about it. We are not in a relationship.

The actor also talked about his previous relationships and added that they never worked out. He elaborated:

They (his past relationships) were one-sided attractions. I’ve only been in one relationship in my entire life so far. When that ended, I decided being with someone is not for me. I like my own company the best.

Earlier, Gauahar was in a relationship with her BB8 co-contestant and actor Kushal Tondon. The two gelled quite well and their relationship remained quite public. However, things between the two went sour and they broke up after an year.

From last few weeks, several reports had been suggesting the reconciliation of the duo. It was also said that the actress praised and congratulated Kushal for his new show Beyhadh. However, the actor denied the news and confirmed that they are not back in any relationship.

–– with inputs from IANS