About a year ago, Anu Malik was accused of sexual misconduct by singer Shweta Pandit in the wake of #MeToo allegations. Recently, the music director who had taken a ‘sabbatical’, found himself back as a judge on Indian Idol 11. Singer Sona Mohapatra, joined by colleagues like Neha Bhasin, took to Twitter to question to Sony TV (the channel that airs Indian Idol) and fellow judges – Vishal Dadlani, Neha Kakkar and Aditya Narayan, whether due process was held and to ask why a man embroiled in a sexual misconduct investigation wasn’t being held accountable.

Mohapatra has relentlessly put up posts on social media in the past few weeks and it seemed to have worked, since the tweets prompted Anu Malik to respond to Mohapatra in a long Instagram post — where he (not surprisingly) denied any wrongdoing and tried to shift blame on the women, asking why the issue wasn’t raised before. Anu claimed to be in a ‘dark place’ and said he was waiting for legal procedure to take its course. 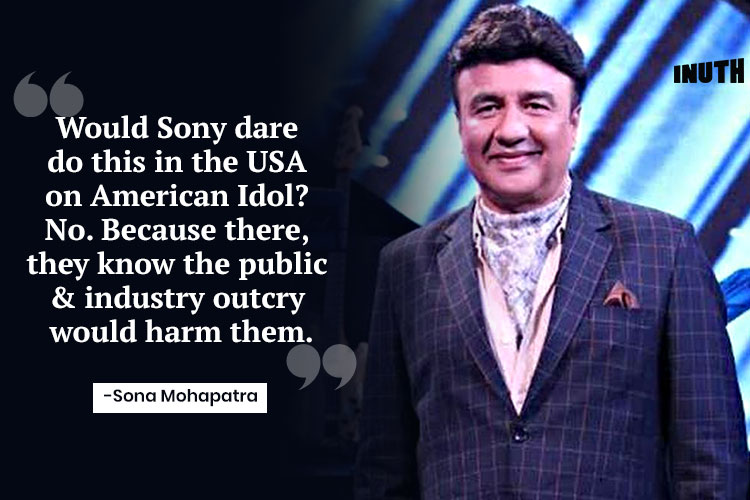 Speaking to Hindustan Times, the Border music director said of this decision to step away from Indian Idol for a second time that he was only ‘going on a break for three weeks’. He maintained that Sony TV had been ‘supportive’ through the entire ordeal, and that he would be soon making a comeback after clearing his name in the said matters.

He was quoted as follows : “It is sad that people have forgotten that I have given great music in the last 42 years and now people are trying to demonise me on Twitter. Definitely, it will affect me and I am in a dark space. I am not here to fight a war with the Twitterati. Log kuch kuch bol rahe hain par bhagwan hai, my name will be cleared. All this has sullied my name, affected my creativity. It is troublesome. It has been going on and on but now I want to end it by clear my name.”

Earlier singers Neha Bhasin had accused Malik of predatory behaviour, while Shweta Pandit had stated in a harrowing account how Malik had tried to kiss her when she was only 15. Mohapatra had time and again demanded that Malik step away from the show until the investigation came to a conclusion.