It’s been a little over two years since Irrfan was diagnosed with neuroendocrine tumour, a rare form of cancer, surely making the actor reassess his whole life. But after a period of silence, during which Irrfan underwent treatment for his illness in London with wife Sutapa Sikdar by his side, he made his way back to shoot Homi Adjania’s Angrezi Medium around a year ago.

A sequel to 2017’s Hindi Medium no one anticipated the joy of watching one Hindi cinema’s finest actors return to the screen. In the Angrezi Medium trailer, Irrfan brings back his usual flair, his nervy awkwardness, his command over dialects. And he’s coming with Radhika Madan.

Irrfan plays the role of a Rajasthan-based sweet shop owner, Champak, who wishes to send his daughter Tarika (Radhika Madan) to a college in London. The film has an interesting ensemble cast featuring the likes of Deepak Dobriyal, Kareena Kapoor Khan, Dimple Kapadia, Pankaj Tripathi and Ranvir Shorey. 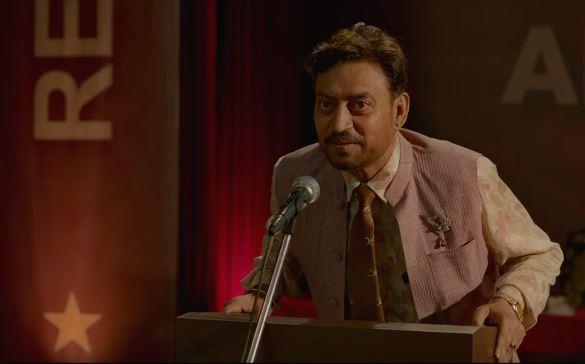 In a country as class-conscious as India, the English language is often considered a vital aid to overcome life’s barriers. That’s something the first film by Saket Chaudhary closely examined, where a couple moves from a congested Chandni Chowk neighbourhood to the posh areas of Delhi, purely to get their child admitted into an English medium school. The film was a modest success in India, but then it went on to become huge in China. After its run in China, the film’s total revenues touched a number that was about 10 times of the film’s budget.

Homi Adajania is coming back to the director’s chair for the first time, after 2014’s Finding Fanny. Can the film please the masses like its predecessor? We’ll have to wait and watch.

Angrezi Medium is releasing on March 20.