“The wise saying – the pen is mightier than the sword, was true. The extremists are afraid of books and pens. The power of education frightens them,” said Malala Yousafzai, popularly known as the girl who stood for education and was shot by Taliban.

Her life has been an open book since the time she started appearing on BBC shows  at very young age, recounting the struggles of girls in Swat valley to obtain education against the forces of Taliban. Being a victim of an assassination attempt, she went on to become the youngest person ever to receive a Nobel Peace prize.

After the autobiography I am Malala and documentary He named me Malala, it’s now time for Bollywood to tell her tale through a film titled Gul Makai. Reem Shaikh will play the title character and the supporting cast includes actors like Divya Dutta, Abhimanyu Singh, Mukesh Rishi and Ajaz Khan, among others.

“The film borrows its name from the pseudonym used by Malala to write blogs about life in the Swat valley, for BBC Urdu,” said Amjad Khan, the director of the film. Gul Makai literally means ‘ cornflower’ and was the name of a heroine in a Pashtun folk story.

A young girl’s voice against militants in spite of numerous threats and a grit that refuses to bend its knees in spite of a close encounter with death surely sums up to a compelling story. Malala’s is an incredible journey for sure and the films motion poster accurately depicts that.

As we see in motion poster, Malala is holding a book up in flames. Her entire struggle for a child’s right to education in the Swat Valley, seems to be reflected. She was only ten when the valley, known for its paradise-like beauty, became a hole of terror. She has recounted in her biography and on numerous other occasions that how almost 400 schools were burnt and people were killed. 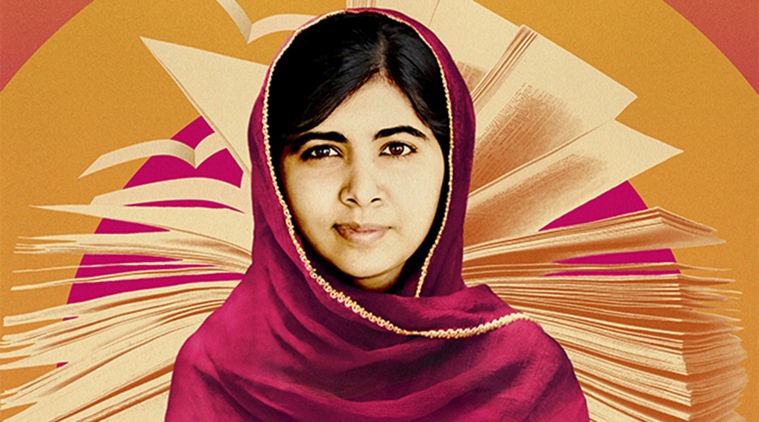 Another element that catches our attention in the poster are the helicopters. An important sequence from her last day in school, which she has vividly described in her autobiography, she said – “we had a special assembly that final morning but it was hard to hear with helicopters overhead.” Finally, the motion poster shows Malala’s face emerging out of the smoke with her eyes reflecting courage.

“But the girls of Swat are not afraid of anyone. We have continued with our education,” she said in her speech that she delivered after receiving the Nobel Peace Prize.

Since, her life is already too well documented, and given the expansive range of interviews she has done with everyone from David Letterman to most late night shows across the globe, it will be interesting to see how Gul Makai narrates the story and whether is it able to provide the viewers with an insight to the not so obvious aspects of her life.