Akshay Kumar’s Jolly LLB 2 has hit the theatres and is reigning at the Box Office. The film is on its way to become the fourth consecutive hit of Akshay Kumar. And why not? This Subhash Kapoor directorial serves a thought-provoking content and good performances. Jolly LLB 2 talks about the judiciary, complacency of legal issues that are denied justice and human emotions. While it has Akshay aka Jolly as its protagonist, the entire supporting cast emerges as the hero of the film. Saurabh Shukla is the soul of the film and in the performance of Annu Kapoor lies the base on which Jolly is able to establish a clear picture of right and wrong. Sayani Gupta and Sanjay Mishra, who make for just a few scenes in the film leave a brilliant impact on the narrative. However, despite so many good looking elements and performances, Jolly LLB 2 lacks the innocence that its first part carried.

Also written and directed by Subhash Kapoor, Jolly LLB, released in 2013 featured Arshad Warsi in the lead. The film too showed a stance on the country’s judicial system and highlighted the class influence in the deliverance of justice. The film turned out to be a surprise hit since it had a no big star presence and a de-glam storyline. However, the audience appreciated its content and deemed the film as strictly relatable.

Both the films show their protagonists fighting odds to emerge as a celebrated lawyer. With full faith in their skills and the fact that they are fighting for right, both the Jollys embark on their journeys in the court. Both face hindrances, receive life threats but never shift their glances from their motive, which is to get justice. However, in the performance of Akshay Kumar, as compared to Arshad Warsi, a sense of stardom can be sensed. While Arshad’s Jolly is easy, low-profile and a ‘non-hero’ character; Akshay’s Jolly is the loud saviour, and carries a strong heroic stance. So when Jolly 1 tells a witness that ‘tu gawahi de ya na de, main toh sach dhund ke nikaluga,’ you become inquisitive to know how will this man discover the truth without any help. On the other hand, with Jolly 2, you are already assured that this man will make his way to the justice because he is the hero. You don’t want to know his journey rather want to see him winning the case because what gives you more pleasure is not seeing him going through the highs and lows but see him conquering the world with his heroic presence in the court. It’s Arshad’s journey to the justice in Jolly LLB that appeals you but in Jolly LLB 2, it’s Akshay’s stylish way to demand justice that you’re impressed with. 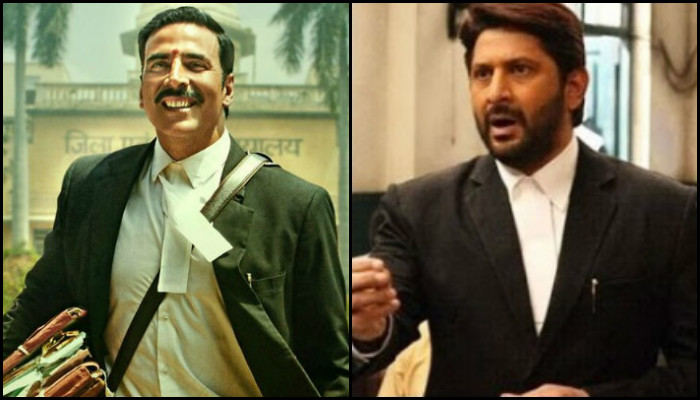 There’s also a scene in the film when Akshay’s character goes to Varanasi in search of a few case-related documents. He meets a person who can help with the documents but wants a hefty amount in lieu. Jolly, who doesn’t have enough money knows nothing about how he will ensure money to this man, yet he promises that he will arrange for the amount. He gets off the boat and takes a dive into the Ganges saying ‘ab Banaras aye hain toh ganga maiya me dubki laga ke hi jayge...’ That scene and you are assured that Jolly has found out a way to arrange for the said amount. You can sense a clear heroic attitude in Akshay’s performance in that scene. All he does is jumping in the river while his people are left surprised as to why he decided to leave such an important conversation in between randomly.

In Jolly LLB, there’s a scene where an old police constable saves the life of Arshad’s character and asks him to run when a few goons attack him in his own house. There is a sense of apology and thank on the face of this Jolly which conveys how he was aware that he could have died had this old man not saved him. Arshad, in Jolly LLB did not play a hero. But, in Jolly LLB 2, Akshay plays a hero. And probably that’s the reason why Jolly LLB 2 perfectly misses the innocence that Jolly LLB had.