Would we even be Indians if we weren’t obsessively judgmental about all things *not* related to us?

Actor Aamir Khan was recently shared photos of his uncle Mansoor Khan’s birthday celebrations, and keeping up with the current trend of senseless controversies, has somehow managed to become a target for trolls. Among the many pictures of family lunches and dinners, is an image of Khan with his daughter (from his first marriage), Ira. In it, we see the 21-year-old sitting on Khan’s stomach as he laughs. All in all, a cute photo with a background that looks like a killer vacation spot.

But the internet found much to outrage over, because heaven forbid celebrities do anything the fans don’t approve of.

The image, which has become a talking point on social media, has quite a few comments that express displeasure at Aamir for… doing what he want to do. To the Internet, his pose as well as his daughter’s clothes (obviously!), seem inappropriate and offensive since it is the month of Ramzan. Last year, actress Fatima Sana Shaikh had been trolled for wearing a bikini during the month of Ramzan. We’d facepalm, but we’re too busy trying to figure out the logic.

You can play with your child as long as she’s not an adult. Logic FTW.

Of course, there fathers and kids should share mutual respect, but how TF is ‘this’ disrespect in any way? :-0

Not even going to try with this one.  What sort of garbage comparison is this?

Just in case you needed reiteration, intolerance is a universal problem. 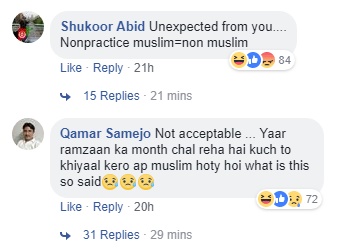 First of all, NO. Second of all, that is NOT a bikini. 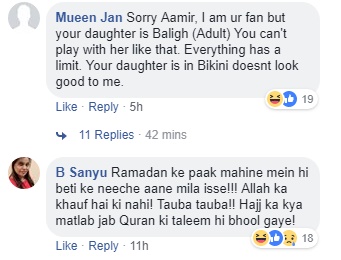 We’re rant about the rising intolerance, instances of fanaticism even while commenting on social media and rabid conservatism, but we have a feeling that nobody’s really in the mood to listen.