Bollywood actor Akshay Kumar is known for doing his own daredevilry stunts. His movies in the 90’s were full of amazing action sequences where Akshay’s courage was on full display. One of his movie titled ‘Ashaant‘ had a helicopter scene which Akshay Kumar performed without the help of body doubles and that scene became the unique selling point of the film.

While it was only yesterday that the Kannada stunt performers died while shooting for a film’s action sequence, the news shocked the whole fraternity and raised a pertinent question. The filmmakers have to put in stringent security measures for the safety of the stuntmen and the actors. Back in 90’s, Akshay Kumar took risks and performed action scenes all by himself. Be it his entire ‘Khiladi‘ series or ‘Ashaant‘, the actor surprised everyone with his audacity. 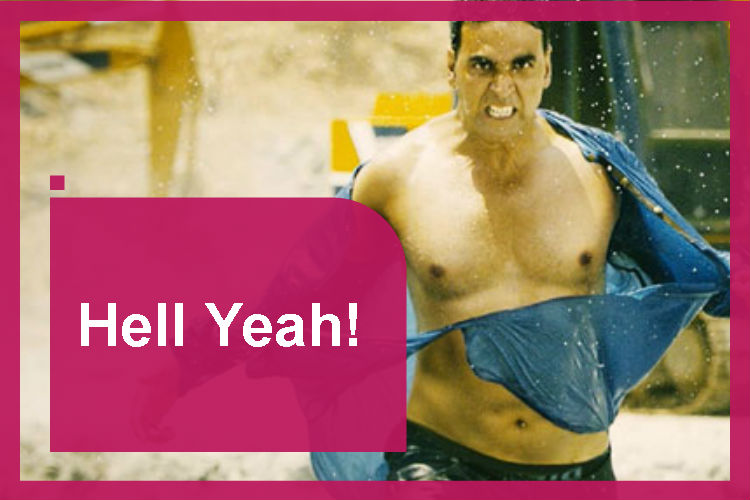 Veteran actor Puneet Issar who was also a part of the movie told Indian Express how difficult it was to shoot for such scenes. He said:

“We had a helicopter scene in the film where I jump on to a helicopter. I was fighting on ground with Akshay when the helicopter comes in and I try to escape. The chopper was about six to seven feet high in the air and I had to jump on to the rope, climb it and then enter the chopper. Akshay was to follow suit and the scene was such that the chopper would take off with me inside and Akshay hanging from the rope. We both did the stunts ourselves. Akshay was wearing safety harness while hanging but still it was a very risky affair.”

“As per the scene, I as the villain had to use the helicopter to try and crash Akshay into running cars and buses. Akshay actually used his feet to run on top of the moving cars and buses while hanging from the chopper. Had his feet broken any of the glass panes of the bus and his leg got stuck, it would have been dangerous. We were lucky that nothing happened.”

Akshay has time and again performed stunts and for that his fans also call him ‘Khiladi Kumar‘. Apart from his scene in ‘Ashaant‘, Akshay also pulled off some amazing stunt sequences. We decided to put together some of the scenes which were risky as hell but Akshay made them look like a cakewalk. The actor grabbed attention for his ‘Khiladi 420‘ stunt where Akshay stood on top of the plane and jumped on a parachute.

While shooting for ‘Singh is Bling‘, Akshay nearly escaped a mishap that happened on the sets. The actor had to jump from within the ring which was set on fire. The actor agreed and right when he shot for the sequence, his legs got entangled within the ring and soon he caught fire. The crew members immediately came to his rescue.

Earlier also Akshay Kumar has voiced his concerns for the stuntman. He said that there is no insurance of the stuntman in Bollywood and he wants to change that. Akshay stated:

“Safety is not great here (in Bollywood). Now finally we have ambulance and doctors on the sets for the stuntman and the cast and crew. (However) it’s surprising that there are no insurance for stuntman in Bollywood, so we are all trying to get an insurance done for stuntman.”

Currently, the Bollywood actor has wrapped up the schedule of the ‘Jolly LLB 2‘ and is shooting for his next titled ‘Toilet: Ek Prem Katha‘. The film also stars Bhumi Pednekar. Akshay Kumar took to Twitter and shared a photograph thereby revealing his next project. He wrote:

“A very good morning from Bhumi Pednekar and me from the sets of ‘Toilet: Ek Prem Katha’ First day it is…need your best wishes,”

A very good morning from @psbhumi and me from the sets of Toilet – Ek Prem Katha! First day it is…need your best wishes