Canadian pop icon Justin Bieber is in Mumbai to perform for his Purpose India Concert. He will enthral his fans at DY Patil Stadium, which has been fully booked with 45,000 seats. The Grammy Award-winning singer is on a tour to promote his fourth album Purpose, which is an experimental collection of songs. While the preparations for the concert are underway, the 23-year-old pop sensation found time from his busy schedule to meet the underprivileged children in the city. It should be mentioned that about 100 underprivileged kids will get to attend Bieber’s concert for free. A special lounge has been arranged for these children to watch the concert. They will also get complimentary food and beverages.

Tight security has been put in place by the Navi Mumbai Police with 500 police personnel and 25 officials keeping strict vigil at the venue.

Justin Bieber arrived in Mumbai early in the morning from Dubai donning pink pullover and black shorts. He was received by Salman Khan’s bodyguard Shera. He will be served rich authentic cuisine representing the 29 Indian states. A convoy of 10 luxury sedans and two Volvo buses will be at the disposal of the artiste and his entourage of 120 people throughout their stay. 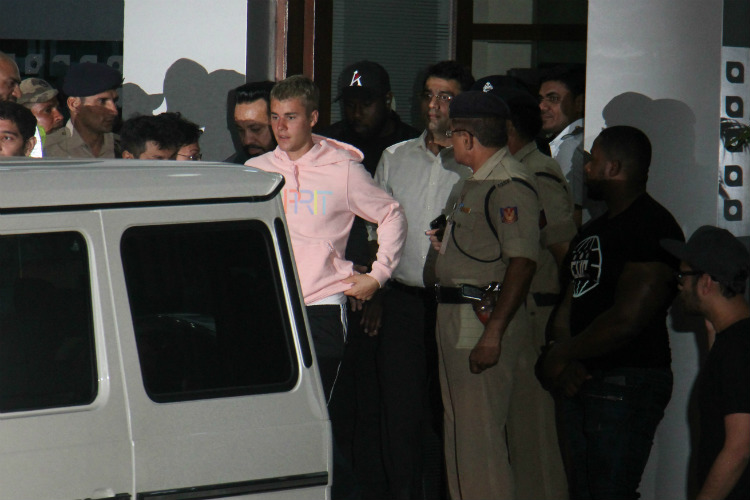 To top it, a Rolls Royce has been reserved for Bieber. Even the suite of the five-star hotel where Bieber will stay has been modified to include truly Indian elements.

.@justinbieber makes time to meet with some underprivileged kids before his #JustinBieberIndia show kicks off today! via @BieberCrewIndia pic.twitter.com/oqX3GDE9He

A string of designers have created customised souveneirs for the star, who will be accompanied to India by his mother. Together, they will explore Delhi, Agra and Jaipur after the much-awaited gig. Bieber came to the fore around 2008, promoted by Usher. “Baby” became his claim to fame in 2010 and he garnered a huge fan, which continued to grow with songs like “Where are U now”, “Boyfriend”, “Love Yourself” and “As long As You Love Me”.

Also read: Game for Justin Bieber’s Mumbai concert? Here’s how you can dress up in style