With Raaj Shaandilyaa’s Dream Girl, Ayushmann Khurrana, Hindi film industry’s favourite quirky cinema poster boy, has slid smoothly into the DMs of slapstick movies. And considering the laughs the film’s one-liners were eliciting, they may have hit jackpot.

The film begins by establishing how effortless Karam (Ayushmann) is at impersonating female voices. Be it pretending to be his friend’s mother for the benefit of school teachers or playing Sita in the local Ram Leela, Karam can do it all. Except stopping his director from using Karam’s gender bending purely as a gimmick, perhaps.

Unemployed and desperate to pay off his father’s loans, our leading man takes up a job at a ‘friendship call centre’, where he talks to men while impersonating a woman’s voice. His alt personality, Pooja, is a hit and with his popularity come three men and a woman desperate to marry Pooja/him. It’s here, right when the conflict begins, that the film begins to resemble several comedy sketches forcefully stitched together, coherence be damned.

For a film that’s largely about a man impersonating women to earn his living, very little screen-time has been given to the female cast, except when the director felt an urgent joke coming.

Mahi (Nushrat Bharucha), Karam’s fiancee, whose love story is neatly wrapped in two scenes and a song, exists solely to provide Karam with a pastime and a possible future conflict. The only other women in the film given fleeting scenes are: Mahi’s grandmother who downs pegs a la the dadi from Vicky Donor, Roma (Nidhi Bisht) who was dumped by three men and has therefore naturally progressed to becoming a misandrist, because movie logic, and the neglected wife of a shayari-obsessed policeman (Vijay Raaz) who comes onscreen only to yell at him.

The women who work in the ‘friendship call centre’, where Karam is perpetually employee of the month, are mere faces in background. They’re just staff who are outshone everyday at their job of being female, by a man. 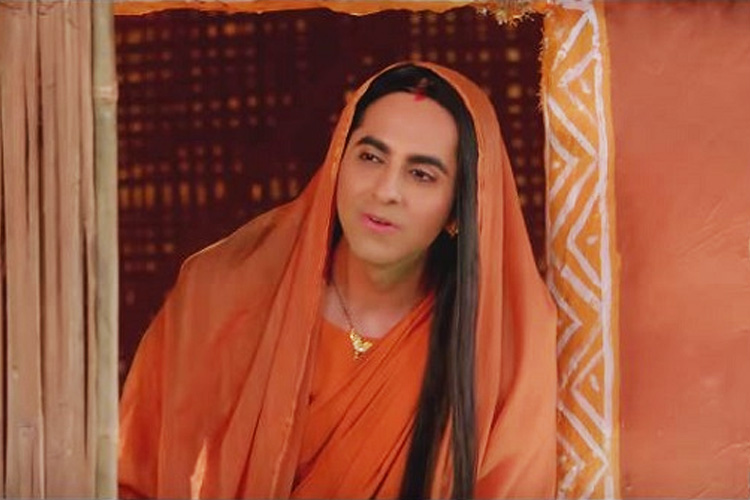 Pre-interval, the jokes land, the film seems to have established the central premise and the looming conflict, and the fact that it is by all means a contender for the leave-your-brains-at-home variety of entertainment. In the second half however, even for a slapstick, Nirmaan D Singh and Raaj Shaandilyaa’s screenplay gets about as murky as the foamy waters of the Yamuna beside which the leading pair romances.

Vijay Raaz as the drunk, bumbling policeman who just wants someone to listen to his shayari, is exquisite. He lights up the screen with his poker-faced one liners, delivering inane poetry with so much éclat, you miss him when he’s gone. Abhishek Banerjee as Mahi’s slow brahmachari brother turned Romeo is funny, but wasn’t given enough of a role to leave an impact. But it’s Rajesh Sharma as W, the owner of the friendship call centre and Annu Kapoor, as Karam’s debt-ridden single father, whose characters feel like they were abandoned by the director soon after inception.

There’s a point where Annu Kapoor’s character metamorphs overnight from a heartbroken Hindu lover who has discovered his sweetheart is Muslim, into a ittar-selling, mehendi-dyed gent who speaks in Urdu. This ‘sketch’ goes on for so long, throwing one stereotype at the audience after another, till one is left gagging. W on the other hand goes from benevolent boss to desperate boss to one who plots murder conspiracies faster than one can spell Ayushmann Khurrana.

Watch Dream Girl purely for the joy of watching Khurrana deftly switching between his two personas, Karam and Pooja with an ease most people don’t have in their own personalities; for the ‘Comedy Circus-esque’ gags, for Vijay Raaz’s brilliance, and for the fact that for once, a slapstick Hindi comedy did not use drag as a crass comic device. For a coherent plot however, you might have to look elsewhere.