Arjun Kapoor is having none of your trashy click-baity content, media walon. And thank god, for things are truly getting out of hand. The Ki & Ka actor, who is currently shooting for Namaste England in London, has recently been quite vocal about the sort of stories media houses churn out stories about women in the name of entertainment. In April, he’d called out a website for a distasteful and voyeuristic article about Janhvi’s clothes, which caused widespread backlash, prompting the website to unpublish the story. 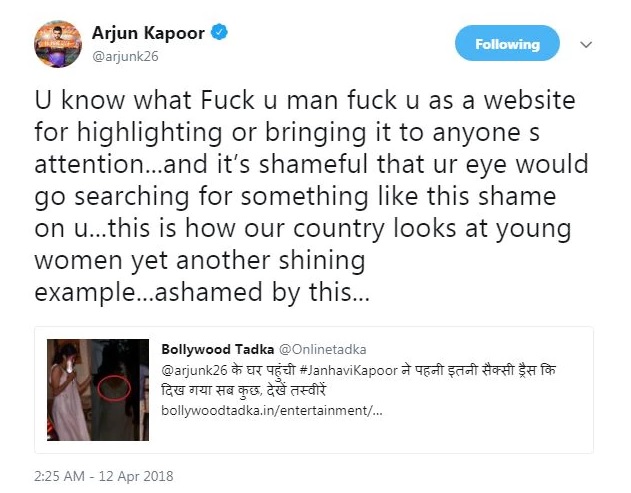 Yesterday, the actor took to social media again because clearly some in the media didn’t get the message the first time round. Retweeting an article by a leading daily’s online vertical about Janhvi Kapoor’s summer dress and the comments it elicited from trolls, Kapoor pointed out that it was pointless articles like these that prompt people to troll more. A connection most online editors would have made on their own, if they weren’t frantically chasing targets.

ICMI: The story he’s talking about explains how a handful of trolls thought Janhvi’s dress was short and ‘needed pants’ to go with it. Basically, they were shining the spotlight over those slut-shaming the young actor and the media house barely even called them out on it.

We get the irony of talking about not paying attention to trolls while also talking about them, but this has to be said. There is a distinction between calling out trolls for being absurd, and in simply pointing out the inappropriate comments made by some internet warriors because it will result in clicks. Shutting someone down for their comments is not the same as simply giving them a platform to showcase their idiocy.

Arjun has a point when he says that the media gives undue importance “to certain elements on social media that don’t deserve it”. “Digital handle editors need to screen through (sic) and not put up certain stories as click bait”, continues Kapoor and honestly that’s the best bit of advice the actor has ever dispensed.

We get it, in the age of UVs the standards aren’t that high but try to churn something out that’s even half-way decent at least?