S.S.Rajamouli’s magnum opus Baahubali 2 has broken all the records at the box office to become India’s biggest blockbuster. The film is a sequel to Baahubali: The Beginning and is already ruling the box office like a boss in just five days of its release. The second part in the Baahubali franchise, a fantasy drama about a fictional kingdom has rewritten box office records, and how.

With its five days all India net box office collection of Rs 440 crore, the film has already surpassed the domestic lifetime collections of its prequel Baahubali: The Beginning and Aamir Khan’s Dangal, which stands at Rs 420 crores and Rs 387.39 crores respectively.

And to celebrate the success of Baahubali 2, Amul has come up with a new poster which says “Baaho se Belly tak.” The poster shows Baahubali, Devasena and their iconic elephant. Check here:

Amul has always voiced its opinion on various social issues and trending topics through its posters time and again. In fact, this is not the first time that the brand has praised Baahubali franchise, earlier, they also did the same for Baahubali: The Beginning with a caption: ”Bahut Butterli!”. Have a look: 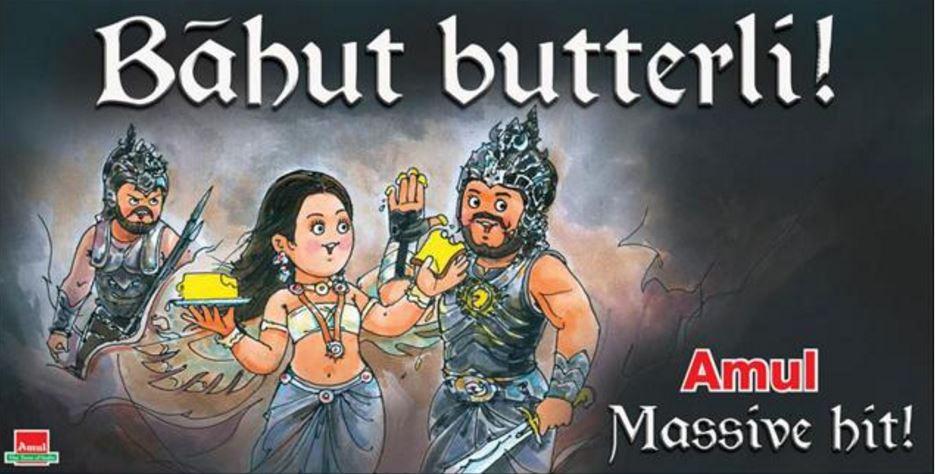 The Amul poster was shared by Dharma Movies on Instagram on Wednesday with a caption: And here comes the Amul validation. #Baahubali slaying it. After zooming past the Rs 100 crore mark on its first day of hitting screens in India, the much-awaited movie which piqued the interest of viewers with the question ‘Why did Kattappa kill Baahubali?’, has kept the audience coming in to find out the answer.

Also read: How much has SS Rajamouli earned from Baahubali? We have done the calculation for you

The film, featuring Prabhas, Anushka Shetty, Rana Daggubati and Tamannaah in the lead, released in Hindi, Tamil, Telugu and Malayalam in over 6500 screens across India, and in 9000 plus screens worldwide. From movie sets to VFX, Baahubali 2 is grand in every way and has only made Indian cinema proud on an international level.