Abhijeet Bhattacharya has given a statement regarding Twitter blocking his account. The singer said that the micro-blogging website is planning to block Paresh Rawal’s account. He said that anti-nationalists are against this action. Abhijeet equalled people from JNU to anti-nationals and blamed this.

“Yes, I just saw it. They are trying to block Paresh Rawal also. All Arundhati and JNU group behind this after Paresh Rawal and I tweeted against Arundhati for her anti-India stand. I (don’t) care a damn… entire nation is with me,” Abhijeet told an agency.

Twitter on Tuesday suspended the account of Abhijeet over sexist and offensive remarks, which stirred up a storm online. In a series of tweets, Abhijeet abused some women users, particularly JNU student-activist Shehla Rashid, following which Twitter took the action. When Shehla openly discussed sex scandals involving BJP leaders, she was “abused by Abhijeet and hundreds of Sanghi trolls”. In reply to her statement, Abhijeet had tweeted: “There is a rumour she took money in advance for two hours and didn’t satisfy the client. Big racket.”
But it seems Abhijeet doesn’t care about the criticism he got. Abhijeet tweeted his opinions after Paresh Rawal had tweeted on Arundhati Roy. When Rawal tweeted suggesting that Roy should be tied to an army jeep, he drew flak of many on social media. While this controversy was already at its peak, the statement of Sonu Nigam has further fuelled it.
Also read: Sonu Nigam quit Twitter in support of crude sexism and mob violence. What point is he even trying to make? [OPINION]
Sonu Nigam announced he will quit Twitter and has urged all “logical and sensible patriots” to do the same, following the suspension of singer Abhijeet Bhattacharya’s micro-blogging account. “I quit Twitter today in defiance of this one-sided sham,” Sonu Nigam tweeted. He said: “One could disagree with Abhijeetda’s language but isn’t Shehla’s accusation that BJP has a sex racket, provocation enough to supporters?” 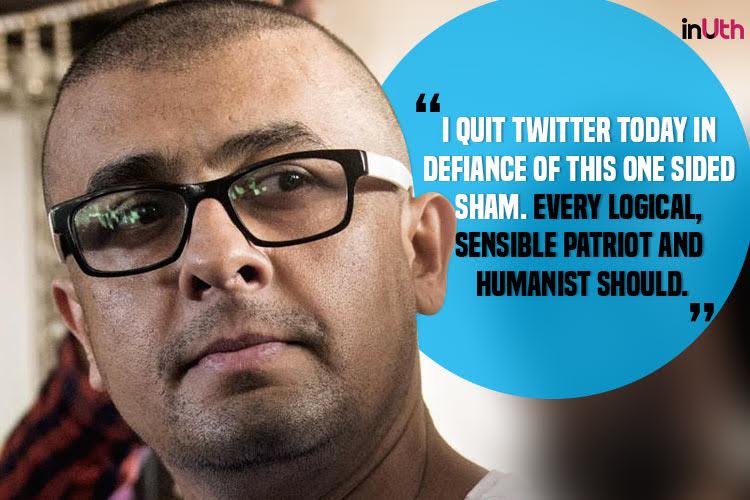 Let us see what shape this controversy takes now.
For interesting entertainment and lifestyle videos from InUth, follow us on Youtube.com/InUthdotcom
Trending
photos