Aamir Khan’s Thugs of Hindostan has been in news ever since its announcement and it won’t be wrong to say that it is one of the most-awaited films for 2018. Ever since the movie was announced, his fans are really excited to know more about the film and his character. Now, a picture of Bollywood’s Mr. Prefectionist’s look has been leaked from the sets in Mumbai. In the photos, Aamir looked ragged and worn out. He can also be seen sporting a curly hairstyle, mustache and a nose in an attire similar to a pirate.

The photos going viral has been shared by several fan pages of the Dangal actor. Talking about his look for the movie, Aamir has earlier told reporters at an event, “In Thugs of Hindostan my look is not muscular it’s not a wrestler’s physique. It will be a lean look.” Aamir’s photos with many ear piercing and nose piercing also gave the movie buffs a hint about his get up in the movie.

The Vijay Krishna Acharya directorial, Thugs of Hindostan is scheduled to release on November 7, 2018. The film also features megastar Amitabh Bachchan, Katrina Kaif, Dangal fame Fatima Sana Shaikh and Jackie Shroff in pivotal roles. This will be the first time Big B and Aamir will be sharing screen space.

Check out these leaked pictures of Aamir Khan from Thug Of Hindostan sets:

Take a look #aamirKhan in all different avatar shooting for #ThugsOfHindostan in a Mumbai Studio.

Also read: Aamir Khan’s look from the Thugs of Hindostan set heightens excitement around the film 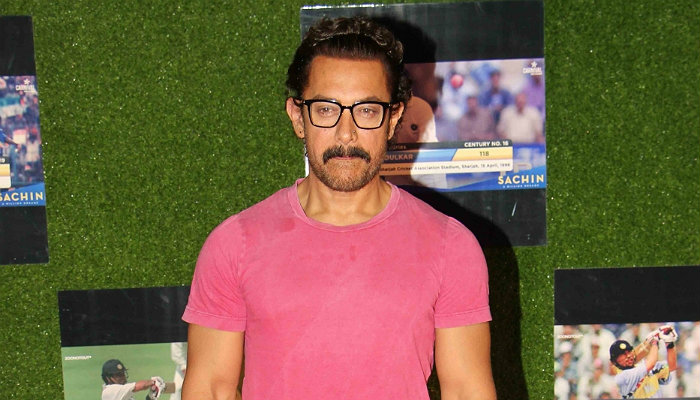 Earlier, there were reports that the film was inspired by Johnny Depp starrer Pirates of the Caribbean. But Aamir during a press meet clearly denied all such rumours. “It is not inspired by any film. It is an action-adventure film but the plot is completely different,” he said.

Also read: Thugs Of Hindostan logo is here and you can sense how intense this Aamir Khan movie looks like from it