Aamir Khan starrer Dangal is unstoppable at the Box Office worldwide. Released in 2016, the wrestling biopic on the life of Mahavir Singh Phogat is currently the 30th biggest hit of last year. It recently surpassed Johnny Depp’s Alice Through The Looking Glass that stood at 299.50 million dollar (Rs 1,929 crore). Now, here’s another record that the Nitesh Tiwari directorial has made. Dangal is now the 5th highest grossing non-English film ever.

Released in China last month, it has raked in a whopping 179.8 million dollar (Rs 1,185 crore). It is the highest grossing non-Hollywood film there. The film has won immense praises from all sections of Chinese audience including President Xi Jinping. Here are the five highest grossing non-English films ever. The data has been compiled using figures from Forbes magazine and converted to Indian currency. 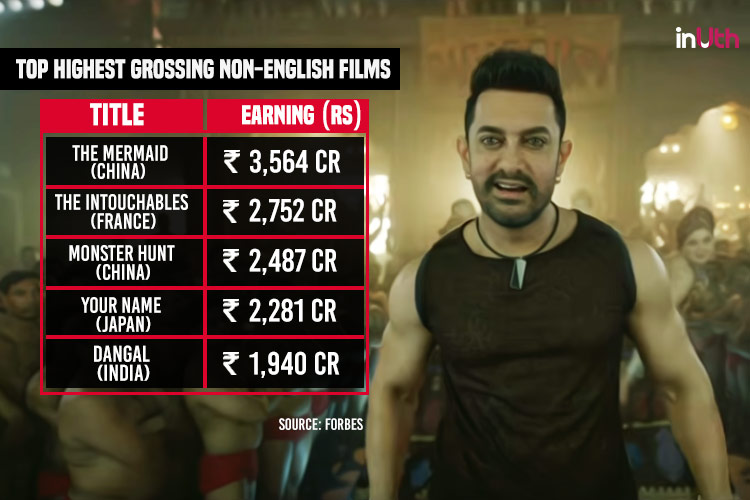 Topping the list is The Mermaid, a Chinese fantasy thriller film. Directed by Stephen Cow, the film is about a businessman who falls for a mermaid assigned to eliminate him. It has garnered around Rs 3,564 crore worldwide. Next on the list is French comedy film The Intouchables, directed by Olivier Nakache and Eric Toledano. Released in 2011, it earned around Rs 2,752 crore. Another Chinese fantasy action film Monster Hunt follows closely with the collections worth Rs 2,487 crore while Japanese animation flick Your Name boasted of earnings worth Rs 2,281 crore.

Also read: Dangal is now 30th biggest hit of 2016 worldwide but THIS is how much Aamir Khan has earned from its China Box Office success

Not an ordinary feat

Dangal‘s success is noteworthy as it has been able to make it to the top 5 despite not being an animation or a fantasy flick. It is a story about a father who defies social taboos to train his daughters to become wrestlers. The list is dominated by the films from China wherein Aamir Khan’s flick has taken everyone by storm.

Starring Aamir Khan, Sakshi Tanwar, Fatima Sana Shaikh and Sanya Malhotra, Dangal collected around Rs 500 crore at the Box Office in India. It is his third consecutive film after Dhoom 3 and PK that has performed exceedingly well in India and abroad.