Amitabh Bachchan, the superstar of Bollywood turned 74 today but he doesn’t show any signs of slowing down.

As opposed to most vintage stars, who kick back with a well-deserved time-off from the cinematic life, Mr Bachchan, at 74, continues to battle his way through, giving the new age actors a run for their money. 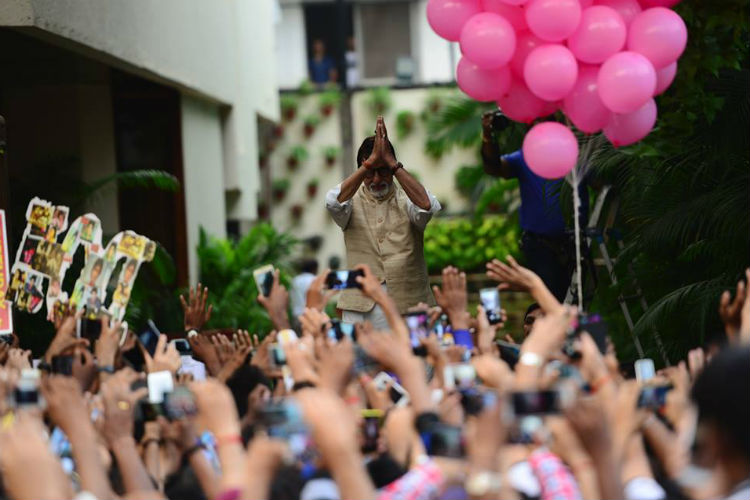 Big B expresses his gratitude to his fans on his 74th birthday.

At a press conference on his 74th birthday, when asked if he ever looks back at his career to reminisce, the 74-year-old actor stated that there’s no looking back for him., instead, hopes to look forward to a brighter future. “I only wish to continue working and take up challenging roles in future as well,” he says.

I only wish to continue working and take up challenging roles in future as well: Amitabh Bachchan to media on his 74th birthday pic.twitter.com/v07SNCsrNg

Delivering outstanding performances in hit films like Piku and Pink, Big B has proved that he doesn’t get older, he just gets better.

After a crippling downfall in the early 90’s that lasted for some years, he turned back to the celluloid and maintained prominence with films like Bade Miyan Chote Miyan (1998) and Sooryavansham (1999) but it wasn’t until 2000 that he earned his prior fame with the blockbuster film Mohabbatein. His performance was widely appraised as Sr Bachchan managed to stand out against Bollywood’s then leading actors Shah Rukh Khan and Aishwarya Rai.

In the upcoming years, he managed to whip up hits one after another, with Kabhi Khushi Kabhie Gham, Baghban and Black. Meanwhile, his television show Kaun Banega Crorepati (KBC) continued to top the charts.

Apart from his film career, Bachchan is a philanthropist, and has aided in the betterment of Indian farmers. He has also been the UNICEF goodwill ambassador for polio, eradicating the disease altogether from the nation in 2014. Bachchan is also a notable feminist and animal rights activist.