On the day of its release, Amit Masurkar’s political satire “Newton” has been selected as India’s official entry to the Oscars. The Rajkumar Rao-starrer rightly deserves the honour as it’s a nearly flawless film that has been true to its subject.

In Dibakar Banerjee’s Khosla ka Ghonsla, Chiraunjee Lal Khosla became a butt of jokes owing to his bizarre name. However, the protagonist in this film was brave enough to rechristen himself From Nutan Kumar to Newton Kumar. While Isaac Newton may have discovered a few laws of nature, our hero is a sucker for the law book. Newton (Rajkumar Rao), a government officer is sent on a election duty to a Naxal infested forest region of Dandkaranya in Chattisgarh. He is accompanied by Malko (Anjali Patil), Loknath (Raghubir Yadav) and another staff (Mukesh Prajapati) who only chose this high security poll station to ride a helicopter. In the Jungle, he is joined by  Aatma Singh (Pankaj Tripathi) a cynical commanding officer and his team of Jawans. 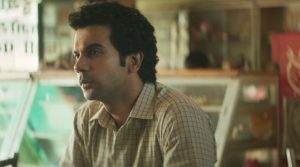 Here are seven reason why this gem of a movie deserves to win the Oscars.

1) Black comedy: Newton is an elegy on betrayed hopes in a country that has failed to provide justice to its poorest and marginalised section of society.  India may boast of being world’s largest democracy but in certain parts of our country, elections are as good as sham. If the voters are casting their votes out of fear or they don’t know who they are voting for, the very purpose of conducting elections is defeated.

2) Great Dialogues: Mayank Tewari’s screenplay is itself the most rewarding thing in the film. When Sanjay Mishra (instructor) tells Newton that the biggest achievement of Isaac Newton proved through his gravitational theory was that nature does not differentiate between poor and rich, in his way he defined the essence of democracy. When Yadav refuses to marry a sixteen and half year old thus depriving his family of Rs 10 lakh (in dowry), his father colorfully tempts him by saying , “Zindagi bhar Ghee me dooba rahega“. When Loknath reads Newton’s future in a pack of cards and the protagonist draws a Joker, he wittily tells him its Hindi’s Jo-Kar thus explaining Newton’s state of mind. 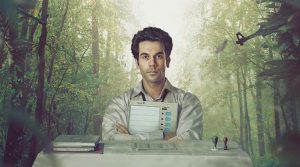 3) Devil in Details: With its humorous touches and intricate visual details, Newton offers a profound insight into our election system, life of Adivasis and even our Jawans. The burnt houses near polling booth, the graffiti on it walls, the fear in the eyes of  tribals makes a subtle statement over sorry state of affairs in certain parts of our country. It also takes a closer look at the lives of Jawans who themselves are victims of the political system. Tired over Newton’s upright nature, when Commanding officer Aatma Singh (Pankaj Tripathi) hands him his rifle saying, ” Yeh desh ka bhaar hai. Aur hamaare kandhe par hai ”. He drove his point home. He just wanted to keep the polling officials safe in an election where the voters have never heard of the candidates and are oblivion to democratic setup.

4) Great ensemble: Newton is the most depressing character in the film. Newton’s proclivity to blindly follow the book even in absurd circumstances may get on your nerves at time and that’s what makes him a winner. For Pankaj Tripathi, this is  his most measured performance till date, he is evolving into one of the best character actors of our times. After Peepli live, Raghubir Yadav once again lights up  the screen with his effortless acting. It must be said that there are few actors in Bollywood who can match his prowess when it comes portraying rural characters.

5) Social commentary: In its two hours run, Newton touches upon various problems plaguing our society.  From the power cut in small towns, to marriage of underage girls, to the menace of dowry system or  the apathy of the government offices and of course the theme of elections in Naxal influenced areas. Amit Masurkar makes the film compelling from the beginning.

6) Asks right questions: In 1968, Hrishikesh Mukherjee directed Satyakam that also depicted the struggle of an idealist who tries to survive apathy, lethargy and corruption. With this political satire, Masarkar once again asks this question whether idealism could  ever be followed in its truest sense as different circumstances demands for different actions. It also underscores the futility of elections in a democracy where people are deprived of basic rights.

7) And finally, it’s high time an Indian film won an Oscar. And Newton gives us the hope that we really can.