The results for the 403 assembly seats in Uttar Pradesh are out. The results show clear mandate for the Bharatiya Janata Party. By winning 324 seats, BJP is coming back to power in Uttar Pradesh after 15 long years. Though, the Chief Ministerial candidate has not been finalised yet. The media reports indicating that, party’s state president Keshav Prasad Maurya is the front-runner for post. Meanwhile, Congress expressed shock on its defeat. “The BJP ‘sold dreams’ to win Uttar Pradesh and voters would soon realise when the party fails to deliver on its election promises”, Congress leader Tom Vadakkan said. However, Akhilesh Yadav, while accepting his defeat, said that he will decide the party’s future course after reviewing the results. Akhilesh further said that his alliance with Rahul Gandhi and Congress would continue.

5: 07 PM: If question has been raised (by Mayawati) on EVMs, govt should probe it. I will also look at it on my level: Akhilesh Yadav

4: 22 PM: Gratitude to people of India for continued faith,support & affection for BJP. This is very humbling & overwhelming,tweets PM

3: 42 PM: We are forming the governments in UP, Uttarakhand,Goa and Manipur, says Amit Shah.

3: 38 PM: The BJP “sold dreams” to win Uttar Pradesh and voters would soon realise when the party fails to deliver on its election promises, Congress leader Tom Vadakkan

3: 00 PM: The credit goes to PM Modi, BJP workers and people of UP. Chief Minister will be decided by Central Parliamentary Board: KP Maurya

2: 10 PM: I have written to Election Commission in this regard, people no more have faith in EVM machines: Mayawati,BSP

2: 08 PM: I thank the people of Jaswant Nagar for my victory. Rest we accept people’s mandate : Shivpal Yadav, SP.

1: 52 PM: Results of the Uttar Pradesh and Uttarakhand assembly polls must be stopped immediately, this is my request to Election Commission: Mayawati

1: 48 PM: If the same system of voting is organised in 2019 polls then democracy in this country won’t exist, Mayawati

1: 43 PM: Mayawati demands re-election and that too with ballot paper.

1: 41 PM: Most votes in Muslim majority constituencies have gone to BJP, makes it evident that voting machines were manipulated, says Mayawati. 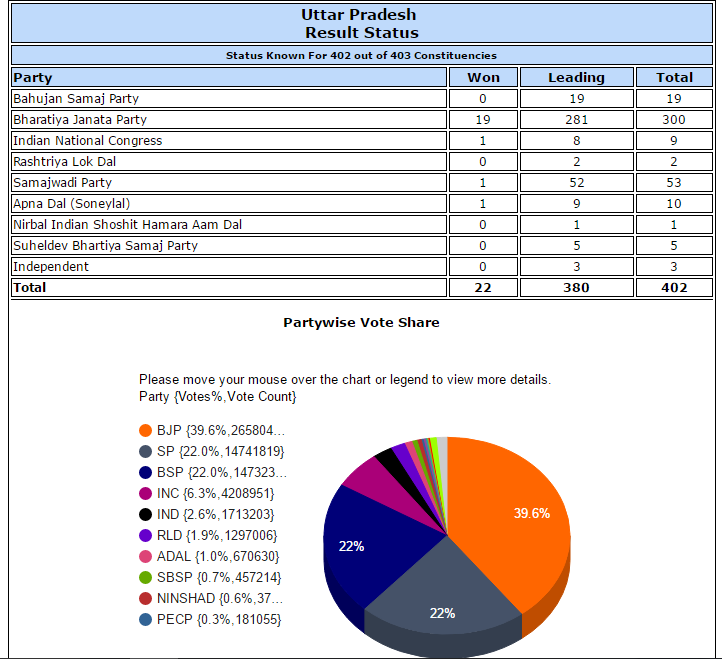 1: 40 PM: Either the EVMs did not accept votes other than BJP, or the votes of other parties have gone to BJP in the EVMs, says Mayawati.

12: 58 PM: This is a win of Modiji’s leadership and Amit Shah ji’s hard work. It has broken all barriers of religion,caste,creed etc: Smriti Irani.

12: 55 PM:  Home Minister Rajnath Singh on Saturday thanked the people of Uttar Pradesh and Uttarakhand for the BJP’s “historic victory” in the two states. 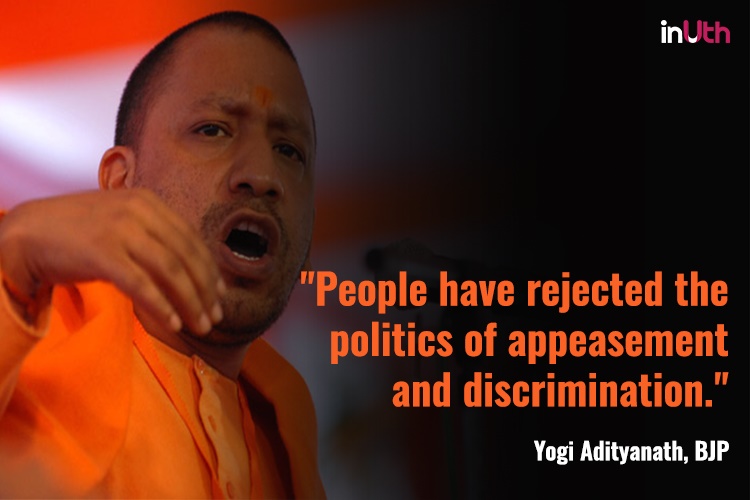 12: 12 PM: no question of party Vice President Rahul Gandhi stepping down, in the wake of the poor showing in the Uttar Pradesh assembly polls, says Digvijay Singh.

11: 58 AM: PM Modi and Amit Shah will take decision on who will be the CM of Uttar Pradesh: BJP’s Meenakshi Lekhi. 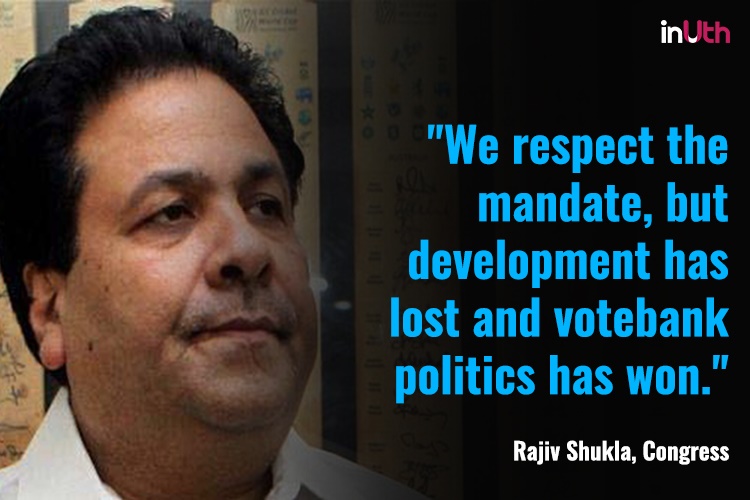 11: 45 AM: Bharatiya Janata Party candidates were ahead of their rivals in all five assembly constituencies of Ghaziabad district.

11: 35 AM: Today nation is standing with PM Modi. This is the victory of people of UP and Uttarakhand: Union Minister Piyush Goyal.

11: 25 AM: Proving wrong fears of a hung assembly, the BJP was set to sweep back to power in Uttar Pradesh on Saturday after 15 long years.

11: 20 AM: We respect the mandate, but development has lost and votebank politics has won:Rajiv Shukla,Congress on.

10: 50 AM: Overjoyed BJP workers, leaders and supporters hugged each other, broke into brief jigs and raised victory slogans in the BJP office here as counting trends indicated a comfortable victory for the party in the crucial Uttar Pradesh assembly elections.

10: 05 AM:  Congress spokesperson Abhishek Manu Singhvi said party Vice President Rahul Gandhi should not be singled out for the party’s poor showing in Uttar Pradesh.

9: 14 AM: Samajwadi Party leader Shivpal Yadav trailing in JaswantNagar, may be a big blow to party

9: 05 AM: Rita Bahuguna Joshi ahead in Lucknow cantt.

9: 02 AM: The Bharatiya Janata Paraty (BJP) on Saturday took a strong lead over its main rivals in Uttar Pradesh as the millions of votes cast in the staggered assembly election were counted.

8: 58 AM: UP ministers Azam Khan (from Rampur) and Gayatri Prajapati(from Amethi) leading.

8: 53 AM: Prayers being performed outside Congress headquarters in Delhi for Dimple Yadav 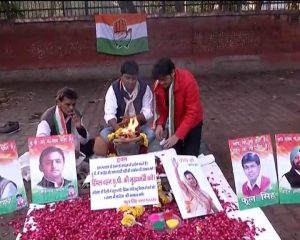 #ABPResults BJP takes early lead in UP, ahead in most Urban seats @abpnewstv Congress ahead in Punjab

8: 29 AM: Drone cameras being used for surveillance near a counting centre in Lucknow.

8: 18 AM: Counting underway in 78 centres across 75 districts of Uttar Pradesh. 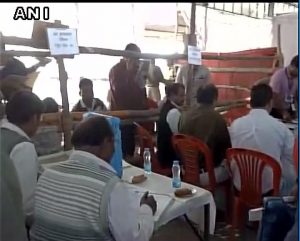 8: 15 AM: Today’s results will set the tone for the future politics in India. It’s a historic day: AAP leader Ashutosh has said

8: 11 AM: Postal ballots are being counted first, then the EVM machines will be considered.

8: 05 AM: Will there be a Modi wave in Uttar Pradesh today? Stay tuned for the live updates.

8: 03 AM:  ‘After #upelection BJP will celebrate with vibrant colours rest will with “TEARS” #Holi2017;, tweets a BJP supporter Abhishek Singh

8: 00 AM: And, the counting begins. Keep following inUth.com for the latest updates.

7: 35 AM: Security arrangements in place outside counting centres in Moradabad

7: 32 AM: Ram Gopal Yadav, supporter of Akhilesh Yadav, rejected the exit polls and claimed that the original exit polls had been changed after being pressurised by the several media houses.

7: 28 AM: Reacting on the exit polls prediction, Congress Vice-President Rahul Gandhi had said that our alliance is winning, such exit polls we saw in Bihar also. Congress is in alliance with Akhilesh Yadav’s Samajwadi Party.

7: 22 AM:  Expelled Samajwadi Party leader Amar Singh on Friday blamed Uttar Pradesh Chief Minister Akhilesh Yadav’s move to align with the Congress for the expected good showing of the BJP in the state.

7: 20 AM: BJP workers celebrate in Allahabad after exit polls show the party leading/winning in Uttar Pradesh. 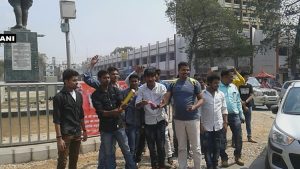 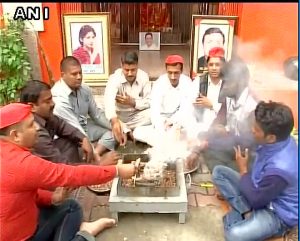 7: 10 AM: We are winning with 2/3rd majority, SP and BSP will be wiped out:Keshav Prasad Maurya,UP BJP Chief.

Even if BJP wins UP, Goa, UK & Manipur, by the end of tom every news channel will be talking abt Modi’s defeat in Punjab. #ElectionResults

7: 02 AM: SP-Congress alliance will win today,and we will expose the people who were conspiring against CM: Rajendra Chaudhary,SP.

7: 01 AM: Uttar Pradesh: ‘Ladoos’ being prepared in Varanasi ahead of the election results 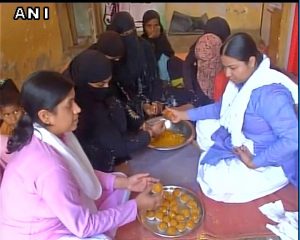 ‘Ladoos’ being prepared in Varanasi ahead of the results (PIC ANI)

In the previous election in 2012, the Samajwadi Party won a majority and formed government in the leadership of Akhilesh Yadav.