The location where the joint road show started, was a sea of people. Saffron caps and BJP flags were all that you could see as far as you looked.
On asking those gathered there, the supporters said that the crowd amassed for this roadshow was due to ‘Maharaj ji’ (Yogi).
The massive cheering crowds were quite a sight, especially when rising temperatures have started to force the people to stay back at their homes or offices during the daytime. 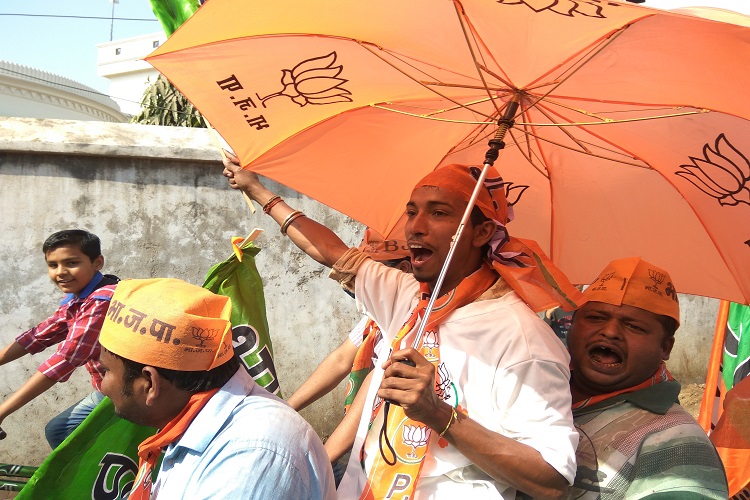 The numbers were so overwhelming that the ‘Vijay Rath’ that Adityanath and Shah mounted, was held back for a while before the procession could take off.
As the BJP ‘Vijay Rath’ passed through the lanes and bylanes of the congested areas, residents peered out from the roofs and windows of their houses, surprisingly, waving and cheering for Adityanath.
The roar of the crowds shouting out “Purvanchal mein rehna hai to Yogi Yogi kehna hai” to firebrand BJP leader drowned out the announcements being made over the loudspeakers.
They had been waiting for hours in the sun anticipating Yogi’s arrival, so they could raise slogans to show their love for Gorakhpur’s Maharaj ji.
“Yahan rehna hai to Yogi Yogi kehna hoga. Ye jo aap itni bheed dekh rahe hain vo sirf Yogi ji ki vajah se hai. Akele Shah ji hote to adha majma hota (If you want to live here, then you will have to chant Yogi Yogi. The crowd you are seeing here is just because of Yogi, if it was only Shah’s roadshow, then half of the crowd wouldn’t have come here at all),” said Om Mishra, a student of Bachelor of Science. 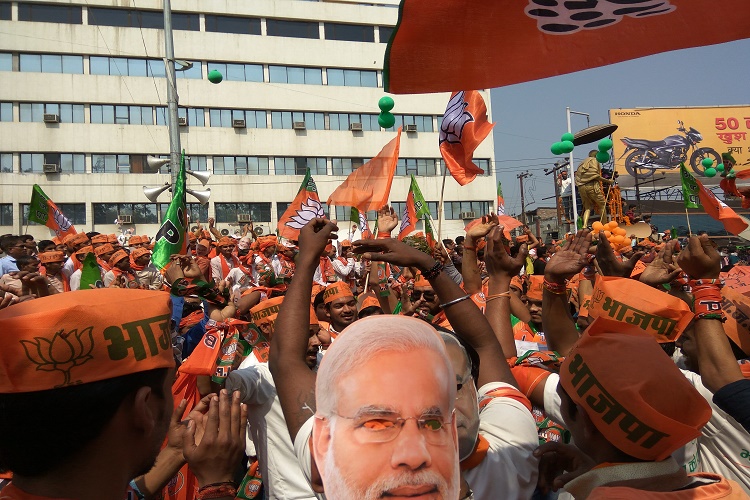 The intention of this roadshow was to encourage the city voters to vote for the BJP on March 4. Notably, the sitting MLA,  Dr Radha Mohan Das Agarwal, is of the saffron brigade only.  He has been the MLA from Gorakhpur sadar seat, since 2002.
At least 1500 motorcyclists took part in the roadshow, and all the way, they were seen chanting Yogi Yogi and raising slogans like ‘Humara CM kaisa ho, Yogi Adityanath jaisa ho’, ‘Purvanchal mein rehna hai to Yogi Yogi kehna hai’ and ‘Modi hai to Yogi hai, Yogi hai to Modi hai’.
“We are here for Maharaj ji. We want him to become the CM, hence, we are supporting the BJP. If the party considers someone else, then we will ditch the party next time,” said Rakesh Singh, a resident of Deoria, who had come here to be a part of a roadshow.
Yogi’s popularity is such, that despite giving controversial statements against the Muslims, people from the minority community came here to the roadshow to support their MP. 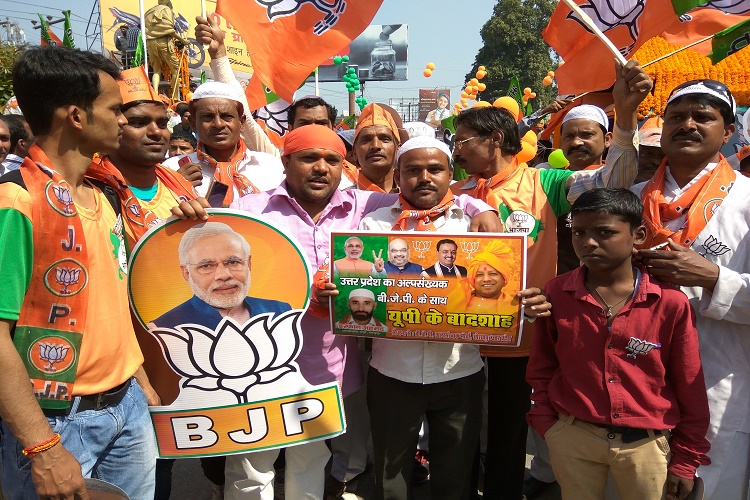 While speaking to InUth, Irfan Ahmad of the Alpsankhyak Morcha, said that Adityanath’s comments are always misunderstood by the people and he is not against the Muslims.

“Yogi ji is not anti-Muslim. People misinterpret his statements. Majority of the Muslims live near the Gorakhnath Temple and till date we haven’t been troubled by anyone. Yogi ji ensures that we live happily and peacefully. I am here to show my support, so that all the Muslims get to know that they shouldn’t be scared of him,” said Ahmad.
Expressing similar sentiments, Nazir Ansari, said,” Yogi ji allows us to run shops inside the temple premises. We are earning because of him. If he didn’t want Muslims to live in India then why would he ensure that we keep earning our daily bread and butter?”.
Amit Shah was here to woo the voters, but it seems, as if, he came to the wrong place. The people here are already following their Maharaj and will do only what he says.

Also read: UP elections 2017: Battling communal divide, this Muslim man claims to be a ‘true supporter’ of BJP in Ayodhya

‘Amit Shah ji kahin aur prachaar kar lete. Yahan to Yogi ji ki vajah se hum jeetenge hi, unka aadesh sab ke liye kaafi hai (Amit Shah could have gone to some other place for campaigning. Here Yogi is sufficient enough to make the party candidate win the seat. His orders will be followed and people will vote for BJP),” said Gopal Sharma, a local businessman.
The ‘rath’ crawled its way through the procession that meandered its way through Reti Chowk, Geeta Press, Mirzapur, Jata Shankar chauraha and Sumer Sagar for well over four hours till it reached its destination at Vijay Chowk. 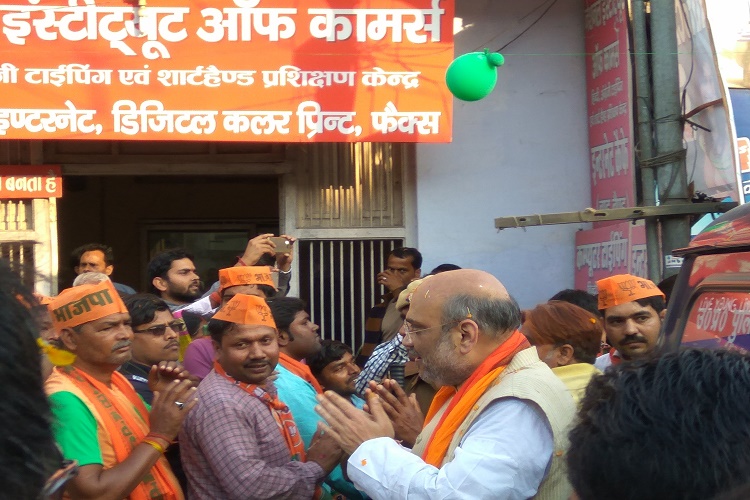 Sensing a fatigue for its development agenda, it seems that the BJP desperately needs the saffron poster boy Yogi to do well in the remaining two phases.
Adityanath appears to have made a strong comeback into BJP’s scheme of things as the man to bank on to swing votes with his polarisation skills.
BJP’s decision to pitch the Gorakhpur MP as the numero uno campaigner in Eastern UP has given fresh energy to the people. Now the only question is that can Yogi help the saffron brigade to wrest power in Lucknow after a gap of two decades?
Trending
photos