Samajwadi Party is no torch-bearer of gender equality.  Deep-seated patriarchy apparently runs deep in the family-led party, which has been led by Mulayam Singh Yadav and his five brothers for most of its history until 2012 when Akhilesh Yadav was sworn-in as Uttar Pradesh chief minister. In the past, Mulayam Singh has made off-the-cuff remarks such as “boys will be boys” to defend the male in a situation of rape, while party-members have been found doubling down to reinforce their leader’s line of thinking. More recently during the ongoing Uttar Pradesh elections, the corpse of the victim who had accused an SP MLA of rape in 2013 was found on Monday.

So, you get the gist. Samajwadi Party is not an outfit a woman voter could trust easily.

However, Akhilesh Yadav’s wife Dimple Yadav is wanting to change that perception. The 39-year old Lok Sabha MP has in recent months emerged as the woman face of the party, in what is being seen as the regional outfit’s attempt to woo nearly a crore of Uttar Pradesh’ women that could form a powerful voting bloc if mobilised.

But your typical city feminism that advocates relaxed attitude towards marriage and sex is not how Dimple is going about the whole thing of attracting female voters. A state election campaign poster featuring Dimple promises a pressure cooker, milk powder and ghee for every household should the Akhilesh Yadav government is re-elected. To be more fair to Dimple though, she does pledge a bicycle to female students across the state, a measure which if implemented could increase participation of women in education. 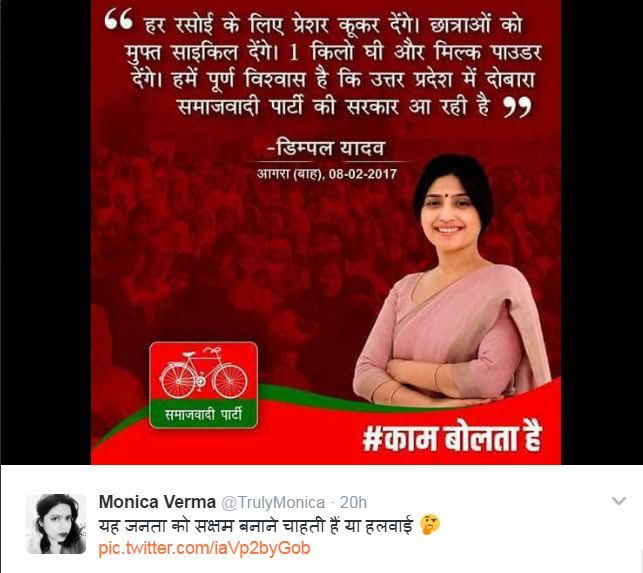 The image that Dimple seems to be cultivating for herself is a hybrid of conventional Indian daughter-in-law who rarely speaks in front of elder members of the family, and a well-educated woman living in a modern twenty-first century married relationship of equal say with her husband. Both these traits appear well to the youth and the old folk of Uttar Pradesh, where attitudes towards women aren’t as progressive as in cities. She is seen as a modern wife respecting her extended family, as witnessed during the public spat between Mulayam and Akhilesh recently where Dimple was seen serving tea to father-in-law Mulayam.

How far will this image take her politically is anybody’s guess at this stage, though many in UP still believe that Dimple is still yet to emerge out of the shadow of her charismatic chief minister husband. InUth has reported how many UP voters still feel that Dimple is not a politically powerful figure in the state politics yet, as compared to Congress’ Priyanka Gandhi.

Similarly, when asked to describe Dimple Yadav in one word, many UP youth came up with the answer: “housewife”.

However, Dimple has to be credited for making a start nevertheless. Who would have thought a decade back that a woman Yadav would be on an election poster of Samajwadi Party. Things are looking up for UP’s women!