“I do not feel much affected by the result because people are yet to be given a chance… Everybody knows muscle and money power are openly used,” said Irom Sharmila after her defeat in Thoubal against CM Ibobi. Shockingly after news of Irom’s Sharmila getting 90 votes which was less than NOTA (none of the above) went viral, sympathy for her started pouring in from all corners of the country and especially on the social media.

The results no doubt left behind a big question over her political significance in the conflict state. Her party PRJA meanwhile tweeted, that “We have lost a battle in the long war, but we have started the fire, initiated a movement which will continue. Thanks all for the support.” However, Sharmila, in a very sad and unfortunate move has decided to quit politics. A decision that came from a deep sense of hurt and ‘betrayal’ from her own people for whom she has been fighting for 16 years. Her defeat then raises the question. Is her fight against Armed Forces Special Powers Act for which she fasted for 16 years futile? Is electoral politics all about caste, religion and tribe calculation. Does her fight count for nothing and should her failure in her maiden political journey seen as a vote against what she stands for? 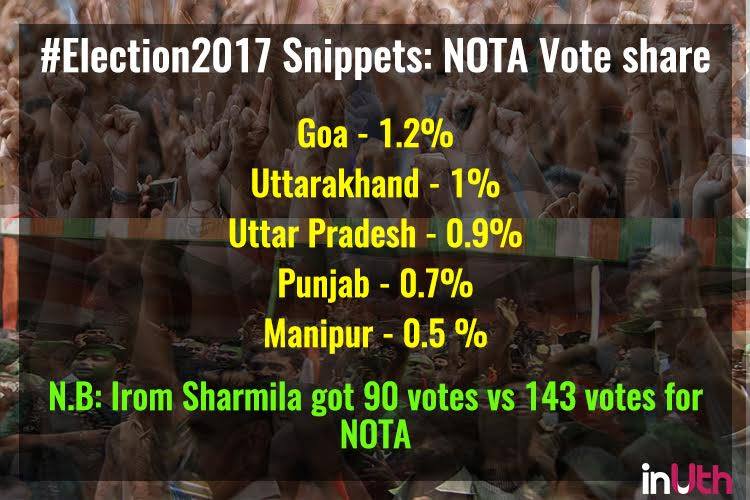 Perhaps, that’s not the case.  To understand her failure, it is very important to understand the nerve of politics in Manipur. The state of Manipur is first of all not in a position where it can compromise on the ongoing problem of economic blockade. The blockade created two major divisions – one is anchored by the sentiments of the Meiteis. Their  major concern is that of of territorial integrity – an issue that has always been there in Manipur politics. Chief Minister Ibobi Singh took this chance and defended and fought the aggression of the Nagas and the National Socialist Council of Nagaland (IM)(NSCN) while supporting the cause of the Meiteis. Whereas the ‘secretive’ nature of the BJP’s framework sign with NSCN (IM) created confusion and led to trust loss among the indigenous valley people.

In both the case Sharmila as representative of  a new party couldn’t buy the confidence of the people as she was away from the social life for 16 years.
Then comes the second reason where Meira Paibis or the women activists who had been her backbone since the beginning of her fight against Armed Forces Special Powers Act went offended claiming she dint inform them when she decided to en her fast and enter politics. This was a major loss, she had to suffer.
The third reason was her personal relationship with her fiancée Desmond Coutinho, a Goa-born British citizen which caused a lot of unhappiness among her supporters.

Even though Manipur is a state where women plays a vital role in the society and are always in the forefront, patriarchy and traditional orthodox opinions prevail. Women have very less space to express their opinion in the political arena.

However, Sharmila’s  People’s Resurgence and Justice Alliance (PRJA) is not dissolving it’s existing. Sharmila while quitting politics has promised to lend her support to the party. It’s convener said: “I have spoken to Eche Irom Sharmila. She has decided to quit politics but wishes to continue supporting PRJA. This is her personal decision, and we must respect that. She has made unprecedented sacrifice for justice. But let’s rejoice that out of this chaos has emerged an incorruptible voice of hope powered by young Manipur-PRJA. Now our real mission begins. We have sown the seed; let’s nurture it until we awaken a giant democratic revolution in our homeland.”

Let’s hope, all is not lost for Sharmila and the cause she stands for.