The voters in Imphal were up for a surprise this morning when BJP national President Amit Shah along with Union HRD Minister and BJP’s in-charge for Manipur poll, Prakash Javedakar went around a few key constituencies on a door to door campaign asking voters to vote for a change in power in Manipur. Shah who is on a two-day campaign trail in Manipur will also be attending two poll rallies today. 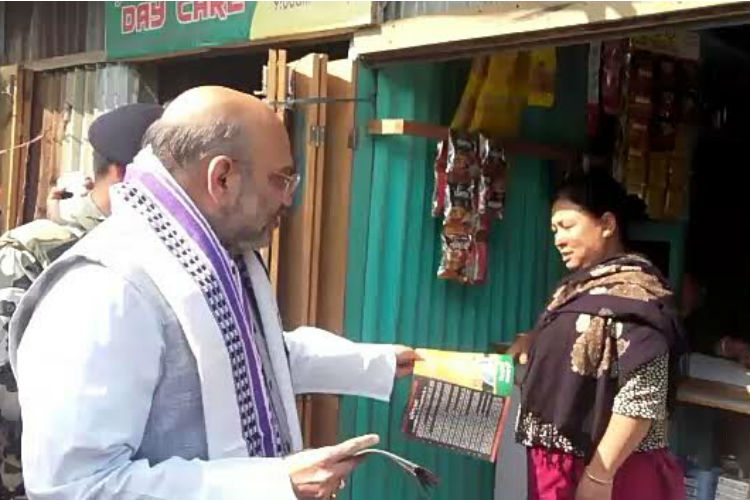 BJP sources added that the party is planning similar door to door campaign by central BJP leaders in Thoubal district which has 10 seats and a strong of CM Ibobi and his family.

Shah had attended two rallies yesterday in Imphal and Sadar hills and had asked voters to vote for BJP to give corruption free governance. Taking a dig at Ibobi, Shah said that 1.51 tons of rice given by the Centre never reached beneficiaries and alleged that there was a lack of transparency in almost all the schemes sponsored by the Centre in the state. “We asked Ibobi to give an account of all the development programmes sanctioned by the Centre,” Shah said, accusing the government of promoting corruption.

The BJP President also expressed confidence that the party would come to power and promised a slew of development programmes across the state. “The state’s failure in various spheres is because of the 15-year regime of the Okram Ibobi Singh government,” he said while addressing a BJP rally in Kangpokpi town today.

He also praised the state’s natural beauty and said that tourism should be boosted to generate income and to curb unemployment. He also promised to transform Manipur into an IT hub to stop brain drain and ensure that the Manipuri youth did not need to go beyond the state for jobs.

Will Amit Shah come to power to fulfill his promise or not will be seen after Manipur will go for two-phased polls on March 4 and March 8, 2017.

With inputs from Zainab Ahmed