Most of us may have heard birds like Parrots and mynahs mimicking human speech but a whale imitating the human sound was a possibility that could only be realised in animated movies.

A team of international researchers have taught a female orca whale to replicate human speech. If you say ‘hello’ to Wikie, a 14-year-old killer whale in France, you may actually get a response from the mammal. The Whale can squeak out quite a few words like “hello” and “bye-bye,” as well as the name of her trainer, Amy.

The research — published Wednesday in the Proceedings of the Royal Society B — has implications that go beyond aquarium settings where Wikie has been restricted to. 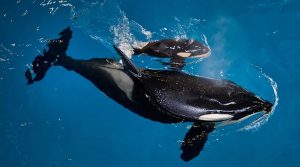 “We found that the subject made recognizable copies of all familiar and novel conspecific and human sounds tested and did so relatively quickly (most during the first 10 trials and three in the first attempt),” experts said in the paper.

The study also suggests that whales could be learning vocal patterns from each other in the ocean.

If the trainer would make a specific gesture, Wikie knew she was supposed to imitate whatever another orca had just done.

“Our results lend support to the hypothesis that the vocal variants observed in natural populations of this species can be socially learned by imitation,” the researchers noted.

What makes Wikie’s audibility more remarkable is, unlike humans, who produce sound with the larynx, whales produce sounds in their nasal passages. Wikie is able to replicate despite being a toothed cetacean.

“Human sounds are easily recognizable by us and if they could produce a human sound that is not in their normal repertoire, that would mean that the only way they could learn it is by listening to it and reproducing it. And that’s what we did,” a researcher associated with the project told CNN.