Those visiting this shop in Azhikode in Kerala’s Kannur district have something surprising in store.
Painted in red, this kiosk situated near the bus stand in Vankulathuvayal, has a board at the entrance, “Collect the product, check the price tag and put the money into the collection box.”

Wondering why this board?
Unlike the usual the stores this shop does not have a shopkeeper.
Inaugurated on January 1, is an initiative by a non-profit NGO, Janashakti Trust. The store has various products from washing powder, phenyl, handwash, to cloth bags.
All these products are made by differently-abled people and students of a special school, Asraya.

“These differently-abled individuals have been making such products. However, they were not able to market it. Then we came to this idea of such a shop. We buy the product in advance from them and then put it in the stall for sale. This way they don’t have to bother about the marketing” says Sugunan P M, convenor of the trust.

Initially, the trust had apprehensions of how such a store would function without a shopkeeper but Sugunan says the local residents have been extremely supportive of this idea.
The owners of the nearby shops open the store at 6 am and closes it at 10 PM.
“Now the local residents have accepted it and running it as one of their own. They even end up putting extra Rs 20 in the collection box,” he says. 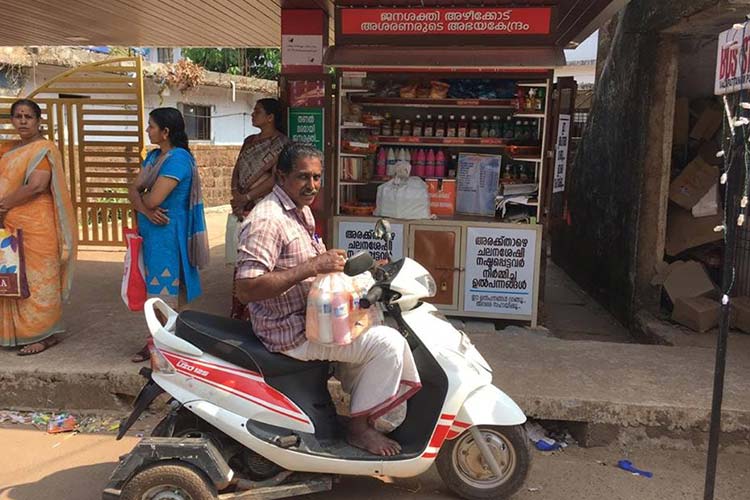 A CCTV has also been installed to avoid any untoward incidents, but Sugunan says there has not been a single instance of stealing.
The shop earns a collection of over Rs 1,000 per day.
According to Sugunan, the idea behind this initiative was to make the differently-abled people financially stable.
Khaleel Sahib, a resident of Kannur, is one of such differently-abled persons who make products for this shop. Two decades back Khaleel met with an accident which paralysed him below the waist. A bedridden Khalil started making household products but found it difficult to sell them.
“People can easily buy these products from popular brands or supermarts. But buying them from this kiosk helps us make a living,” he says, talking to a local media.
The trust had initiated it as a pilot project and plans to expand it. “We have requested Kannur Corporation to allot us some land. If that is approved, we are also planning to sell organic vegetable products made by farmers living in the remote areas, who find it difficult to sell their products in the city,” says Sugunan.