Saji Cheriyan a Christian businessman based in UAE is hosting Iftar– a meal with which Muslims break their fast at sundown during Ramadan– for 800 workers.
The Iftar meal includes dates, fresh juice, biriyani. “I have made arrangements to offer different kinds of biriyani so that they don’t get bored of eating the same dish every day”, said the 49-year-old. Cheriyan, who is from Kayamkulam, had earlier hit headlines after he built a mosque for the workers living in Fujairah, UAE. Cheriyan told Gulf News that his life is an example for the people to believe in the saying “The more you give with pure intent the more you receive”.

And his words seem to have come true from the replies of those who had the Iftar. “The world needs people like him. If there are no people like him, the world will end. We are praying for him. Allah will bless him,” said Abdul Qayum, a 63-year-old bus driver hailing from Pakistan also had the iftar on Wednesday. 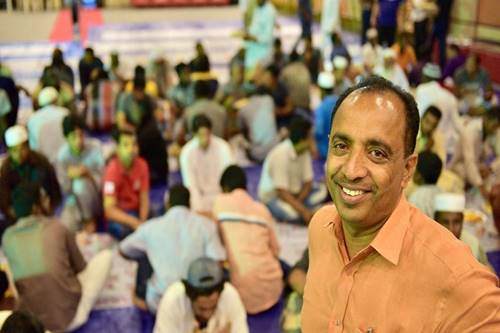 Last year, Cheriyan had built a mosque at a cost of Dh1.3 million which can accommodate 250 worshippers at a time and 750 worshipers in the courtyard. “The workers living in the tent accommodation have to spend at least 20 Dhiram to go to Fujairah city or another industrial area to attend the Juma prayer in a mosque. So, I thought it will make them happy if I build a mosque here next to their accommodation,” Cheriyan was quoted as saying by the newspaper when the mosque opened last year.

“I owe a lot to this land. We need to appreciate them for the way they have accepted people from different countries and religions. People having Iftar here remember me and my family in their prayers,” he told Gulf News.