In 2012, I wrote an article about gay social media apps. As soon as the article went online, a bunch of people started attacking me on Twitter. One of them was a person who openly supported and still supports Prime Minister Narendra Modi. His views on all matters, from economics to social, are mostly on the Right. I don’t know if he is conservative or a libertarian, he called me a homophobe and claimed that I’m exposing a subaltern trend to the mainstream. I was a little confused.

Delhi High Court had stuck down Section 377 and homosexuality was not a crime in India. As a reporter, I was asked to report a trend of dating sites and apps involving gay men, and I did. I was cautious in not naming anyone or exposing anybody’s personal information. However, a few years later TV 9 did a horrible story ‘investigating’ into users of a social media site, for which it was fined. That’s another story for another time. Now coming back to this gentleman who had issues with my decision to write a story on gay subculture. We had our argument and soon became acquaintances. 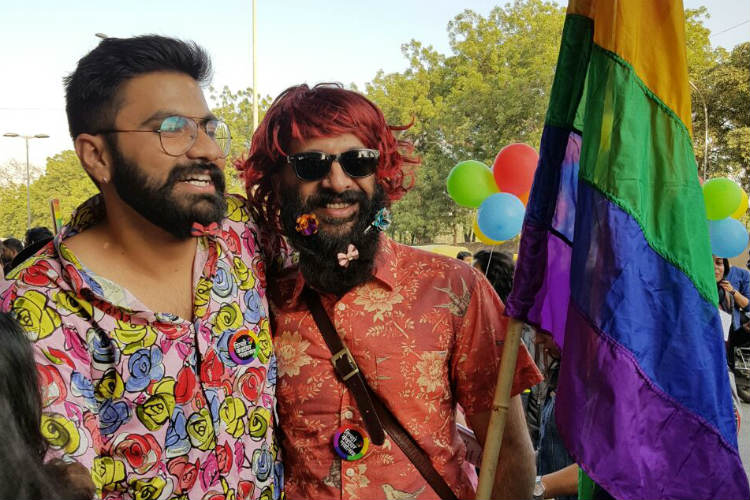 In the run-up to the 2014 general elections where Modi was the prime ministerial candidate, many of my friends or acquaintances on the right would agree that what the apex court did was wrong. They would say RSS doesn’t like the idea of criminalising gay sex even though it doesn’t support the idea of gay marriage. And they would stop there. The aim in 2014 was to defeat Congress and ensure Modi becomes prime minister. So such issues were only a distraction even if you are closeted homosexual or in state of sexual fluidity.

Today Delhi witnessed its 9th Queer Pride Parade. Hundreds of young Delhiites came out on the streets to celebrate the god-given right to be gay and to protect the unfair decision of the Supreme Court. As my colleagues kept sending videos from the pride, I noticed young left leaders like Kanhaiya Kumar and Umar Khalid participating in the parade. But nowhere around were any visible faces from the Right.

ALSO READ: How Premier League came out in support of the LGBT community

I have been wondering where is that friend or acquaintance who before 2014 was explaining to me the virtue of libertarianism where the state has a minimal role in citizen’s life. But then, ‘minimum government, maximum governance’ does not mean that the state decides who I fuck in my bedroom.

Where is the 56-inch chest when it comes to protecting the rights of a particular section of citizenry? At least other political parties like INC and AAP have openly supported gay rights. I don’t see any such initiative from anyone from the Right. Only the apologists keep talking about it behind the closed doors. Fact remains that some high profile young Modi supporters on Twitter are gay or bisexuals. I know a few personally but when it comes to the right of the sexual minority, they have different priorities.

One doesn’t know if Modi government is trying to follow a conservative line of thought or libertarian. Of course, before the election, it sold two different ideas to two different vote banks. Latter are young, mostly foreign educated youth who worked with Modi’s campaign on the idea of free economy and a liberal space. And as an extension, managed to impress rest of the millennial population. Slogans like ‘minimum government, maximum governance’ is a wet dream of any libertarian. But then, there was also the conservative extreme Right who were needed to win elections.

By the way, the same conservative Right hates it when they are compared with their counterpart in countries like Pakistan, Iran and Saudi Arabia. After all, both hate the idea of same-sex union.

Today, when I tweeted two photos from the Pride Parade demanding ‘achche din‘ for homosexuals in India, a senior journalist pointed out that even RSS is in favour of decriminalisation of homosexuality but will not encourage it.

All I could say is “encourage is a funny word”, as is political opportunism aka Jumla.