John Galsworthy once said that ‘love has no age, no limit; and no death’, and it stands true but only in a Utopian world. Because in the real world, love has limits, a lot of them. We are allowed to love but only under certain terms and conditions. We are allowed to love only if we fall for the opposite sex, people from same religion, same caste, etc etc. But what if, God forbid, your heart falls for somebody who is of different sex or religion? And if you are an Indian, you are doomed.

While Indian youth accepts homosexuality and queer identities more openly than before, the doors of family, home, and schools still remains closed for the LGBTQ community. The battle for acceptance of their sexuality and the right to openly express their choices is an ongoing battle.

Though social media and corporate initiatives have created an increasing awareness of LGBT rights and their voices are being heard through gay pride parades, get-together, and online groups which act as platforms of LGBT activism, individuals are left to battle it out with their families – to explain to them that it is not a crime to be gay. Some families plan secret honour killings as that’s the only way to “treat” homosexuality. In other families, lesbian women are subjected to family-sanctioned rapes as “corrective” measures. And it this fear of being ostracized and ridiculed that makes the homosexuals in India keep their identity hidden.

And if you don’t believe us, here are some Quora answers to help you understand their plight. Have a look at them yourself.

Life would have been much better had people accepted us. Since they don’t, so our life revolves around pretending and hiding.

Life gets complicated somehow. Especially if we go away from our home for further studies and share room with just another girl. It’s easy to hide for some time but can’t hide it all the time. If not everyone then room mate surely will get some hint. Though we don’t fall for every other girl but there are things which make us uncomfortable, and that’s the grey area where we find it difficult to hide. But then the problem is we can’t control it plus if we confess it then it will leave others uncomfortable around us. Like, the other day my room mate was asking me if her nipples were visible in the top she was wearing. I looked and told her no. But when I said this, I had a smile on my face which I could not control. Now this question was normal that two girls can ask each other but you tell me will she ask the same question the moment she gets to know that I’m a lesbian?

This was just a minute example that I gave but there are many things which makes us uncomfortable and people think that either we are weird or insane to smile for no specific reason.

The reason we have to hide and pretend all the time is that society will hate us. The only reason we live in depression most of the times and have suicidal thoughts are that we can’t tell anyone and not everyone is courageous to come out and face the trouble.

The other day my gf wanted to kiss me. I told her to wait for like years till we start living together because if anyone see us, we will be in jail. Though I consoled her, but here “living together” looks like a distant dream when my parents are worried about getting me married (obviously with a boy). They have no clue about anything. 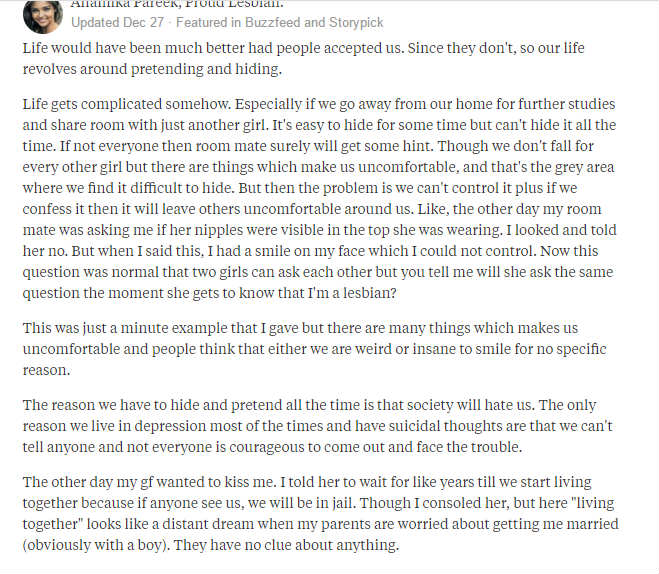 Well, now that I have given my orientation away, I don’t quite know whether it will garner hate or sympathy or support. To those shaking their heads in disdain (or ready with holy water to cure me of my homosexuality) I would just like to say that I am just like you in every possible way. I have a fully functional (although erratic) brain, and could pass off as one of you so easily that you may not even know that I am the one standing next to you at an eating joint, or in a public transport. The only difference would be that I do not hate and I do not judge.

Growing up in a severely orthodox country, like India, my homosexuality has been well accepted by the seemingly younger generation, while the elder ones still pass it off as ‘a phase’, but not being a teen and having a partner who I KNOW I am going to spend my forever with, I already know that it is something that I am and have always been. Yes, although like quite many, I lived in denial for a while and tried to fit into the norms set by the society, but it never really did work out. That is when the exposure to all things LGBTQIA entered the scene where it made me comfortable being myself and accepting my own sexuality, and now I am a proud and out Lesbian (often commented on by people as the “L-factor” when I am at coffee shops with my girl)

Now that I have mentioned her twice, it is imperative that I must introduce my girl. She is beyond everything I had ever imagined. If there is perfection walking the streets of this flawed world, it is her. She is an embodiment of true beauty and is well-endowed in terms of brains too! It is her mind that I love the most, and it is her who I love the most. I am crazily and helplessly in love with her, and even if I had the option of choosing ANY girl in the world and having her (including my teen crush Lady GaGa) I would chose my girl over and over again! It only is a bummer that she lives 450 km (some 280 miles) away from me… yes, we are in a Long Distance Relationship (Does it seem like a sitcom material? Writers get your pens out ’cause this is going to be a helluva episode) The distance does not take anything away from all the passion and emotion we hold for each other (I must have mentioned, she is perfect & the best) but then some of the days it takes its toll on us, when we miss each other bad and all we want to do is hug each other. Phew!

I guess this is just a brief to what my life is all about, sometimes I get hilarious and entertain myself to the point where I randomly burst into peals of laughter (yes, that is me, the crazed stranger) and sometimes when I get deep and philosophical, I become so sober that it is hard to comprehend that it is the same me. Anyway, that’s all for a start. Spread the love 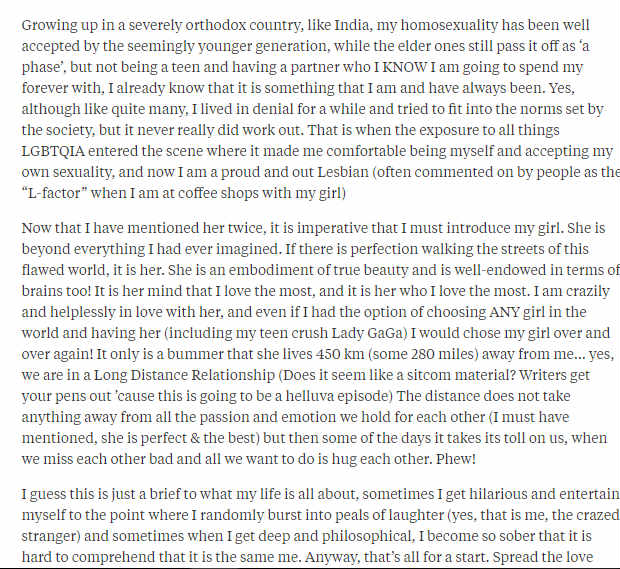 To be a lesbian in India …

I am a 23 year old regular college going girl. I am still not sure about my sexuality because I get attracted to both the genders but I find sexual urge more toward the opposite gender and not toward the same gender as much. I think it’s only lust because genuinely I have always felt love for same gender. I define love as a true feeling of care and affection toward a person.

Its really tough to live a life like this. I often think that I am not going to marry anyone because I can not openly accept the ones I actually love and I don’t find any joy in being with a guy.

The frustration is too high as you can’t be yourself you have to pretend to be straight which you are actually not. I hate it . You don’t know if you can share this secret with anyone or not, as people are not open minded.

I have never shared this secret with anyone, not even with my parents or friends, but I can tell you from my life experiences that there are many girls who got attracted to me and I knew they were pretending to be straight . There must have been 15–20 girls who have showed me feelings (till now). But they pretend as if they are completely straight .

I think homosexuals and bisexuals are not uncommon but they are only hiding. If we all plan to come out then I can guarantee you that proportions of LGBT and straight people will not differ as many assume. There are many who live a very pretentious life.

A message to everyone : being a bisexual or a homosexual is not a choice, its as natural as breathing. STOP THINKING THAT IT IS A DISEASE ! I just hope India becomes a place where people start to accept other sexualities as well. 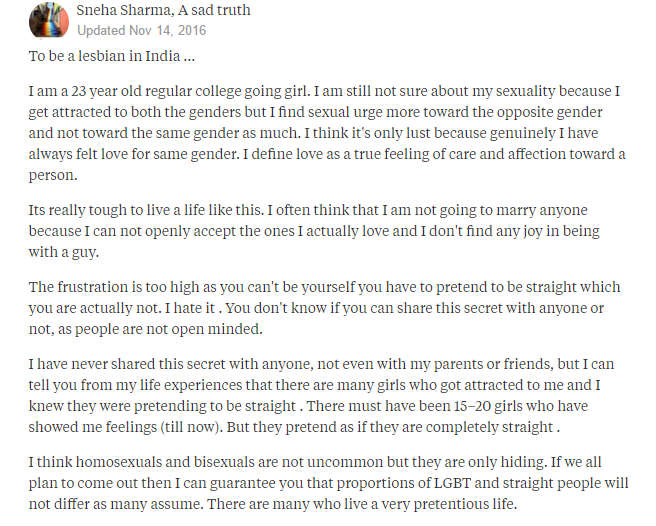 Till the age of 16, I was very confused about my sexuality. I was attracted to both guys and girls. I dated only guys until I was in my 2nd year. I went into a relationship with my then friend now girlfriend. We were in love. In our 4th year, my partner and I decided to come out to our parents as it would create even more trouble if they found out from any third person. Our friend circle was common and thus they knew about us from the very beginning. They were and still are very supportive.

We, with the help of our friends arranged a small Graduation party and we invited our parents there. We made a video about our relationship and that how we are just like any other heterosexual person. We played that video on that day. Our parents were shocked. Nobody moved! Their faces expressionless. It was the calm before the storm.

My mother slapped me. My father didn’t say a word. My partners parents left the room. I tried to explain them everything. Then, when I was about to cry, my father came to me and hugged me tightly. That was the only response I needed. That was it!

After 4 months me, my partner, both of our parents met and went to a nice restaurant to have dinner together. Our family have accepted but our relatives still doesn’t know about our relationship. Thus, I avoid making it evident that I am a bi-sexual.

We are 26 now, working in well reputed MNCs in Pune. Living together. We plan to fly off to the US after few years, get married, settle down, have kid(s) and lead a happy married life. 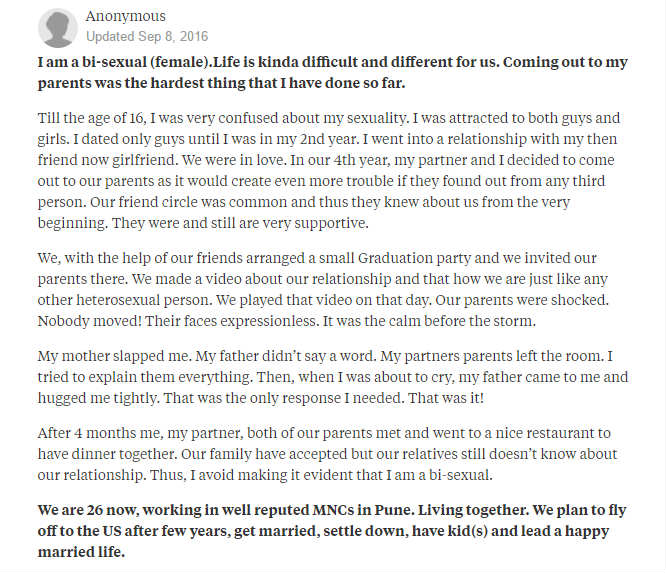 Well, now that you have seen and read these answers, please try to understand their pain and if possible, let’s stop judging people on the basis of their sexuality because, at the end of the day, it’s everyone’s personal choice!